Week 5 Recap: Together We Drink

Two weeks in a row, Tech faced a ranked team and came out with the loss. So, instead of talking about the football, we will just talk about the tailgate.

Raising Money for a Good Cause 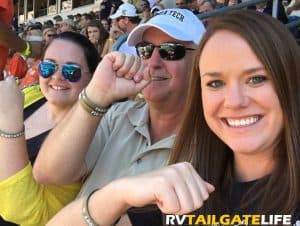 Over the summer, one of our tailgaters was in a serious diving accident that left him paralyzed. He’s been in treatment ever since and the medical and related bills are heavy. His insurance and veteran’s benefits are covering a lot of the expenses, but there is just so much to do that they don’t cover. Fortunately, he’s gotten a lot of support from the community, including Home Depot’s community volunteer force that is helping to renovate his home for the wheelchair. Our tailgating group is heading up a campaign to help raise money for Chris. Immediately, we setup a GoFundMe account to help raise money that had a lot of initial success. But that hasn’t been enough and are now selling armbands and raffle tickets for $5 each.

If you can, we would really appreciate you donating to our friend Chris’s recovery fund! He is a veteran, having recently missed a year of tailgating to serve in Afghanistan. And he’s an awesome uber-fan. The tailgate has not been the same without him this year. The plan right now is that he will be released from the VA hospital around Thanksgiving! Let’s make sure that he can go home with all the equipment and support that he needs! Click here to donate at GoFundMe for GTFlunkout. 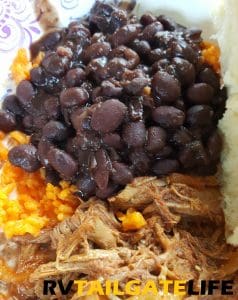 So we’ve talked about how kickoff times affect your tailgate. With the early game, we held the big tailgate meal until after the game. With the opponent being Miami and more than a few of us with some Cuban heritage, this week, we themed it up with a potluck Cuban dinner. The menu included ropa vieja and black beans.

One thing about Cuban food – it smells delicious! Definitely not something you want to cook in your RV if you are trying to avoid odors. There are some advantages to being a part-time RVer and being able to cook in a full kitchen ahead of time is one of them. Crockpots for the win!

Georgia Tech has a marketing hashtag Together We Swarm. During last year’s rough season, we changed that to Together We Drink. Sometimes, it is rough being a Tech fan but we get through it with a lot of friends and alcohol.

There was plenty of moonshine at this week’s tailgate. Seems like as the weather cools and our team losses a couple of games, the alcohol gets stronger. Beer is just not enough for these die-hard tailgaters!

Don’t forget to check out the Pumpkin Spice Sangria that I mixed up for the Friday night portion of the tailgate – a perfect blend of fall in a pitcher! Requests for the recipe are coming in daily from those that tried it, so you will want to as well. Don’t be scared off by the pumpkin spice if you aren’t the biggest fan of pumpkin spice lattes. This drink is worth every bit of #basicwhitegirl grief you might get, even if you are a guy. Trust me.

Rooting for the Second Favorite Team

We have a saying around here that our second favorite team is whoever is playing Georgia, our in-state rivals. This week, that meant Tennessee. One of our tailgate members even went to Tennessee (she’s a GTer by marriage), so she was uber-excited by the Tennessee-Georgia matchup. And what a game that was. Multiple lead changes in the last minute are always fun – if you are watching from afar. The way that game ended was a sure fire way of ripping the hearts out of Georgia fans everywhere.

How do your friends help you through a team loss? Comment below!