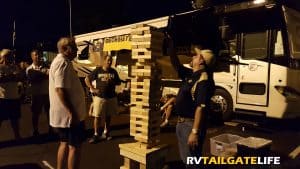 For the first time all year, it seemed like things were starting to really click for the Georgia Tech football team on the field. They didn’t wait until the last minute to take control of the game nor did they let a lesser team hang around longer than they should. Defense stepped up several times and the offense looked like what we expect from a Paul Johnson offense, with some quick scores and some long drives.

At most tailgates these days, you’ll find some sort of interactive entertainment or tailgate games. No longer is just a football to toss around enough to keep everyone engaged for the hours and hours of tailgating that happen with the RV crowd. Now, you’ll find large outdoor versions of Jenga and Cornhole or bean bag toss. We are also seeing more and more games that combine several existing games, like cornhole and beer pong.

At our tailgate, the Jenga provider has even taken it upon himself to fashion a table that adjusts for uneven lots. You’ll need a flat and level surface for Jenga to work best. It also helps to have some kids around that like to build things to put the game back together after you knock it over.

A football is still a good thing to have around though.

Eating Right at the Tailgate 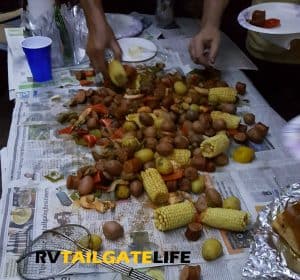 To celebrate the win, we had a Low Country Boil. It was on the spicy side of things – “if you aren’t sweating, you aint eating.” Sausage, corn, shrimp, potatoes, onions, peppers, mushrooms, and even some herbs. Don’t forget the garlic bread yumminess too.

Did I mention the pre-dinner of smoked brats, chicken, pasta salad, and desserts? Oh yeah! Or breakfast that included pancakes, fresh fruit, sausage biscuits, and ham?

I’ve said it once and I’ll say it again, if you leave a tailgate hungry, you are just doing it wrong.

So when a fellow tailgater tracks you down to tell you that the generator is producing a lot of white smoke, you know this will be bad, right? Not sure what the issue was, but the smoke disappeared. We checked the oil and while it was a little low, nothing too bad. Looks like it may be a little on the “dirty” side and ready for an oil change. I went ahead and topped it off since I knew it would be running awhile more.

All is well, at least for now. No more issues the rest of the tailgate, but I’ll be watching it for the next few weeks. As we get into the cooler tailgates, it will be less of an issue. I can go almost the entire weekend without the generator if I don’t need the air conditioner. My rig can run on the battery bank with only minimal recharging. I don’t have big, fancy entertainment systems and the fridge runs on propane.

It’s always funny when the guys know less than the girls do about engines and maintenance though. One guy was surprised that I had an oil filter on my generator, and another was like “I wouldn’t even know where to start.” But hey, at least they knew to let me know, right? 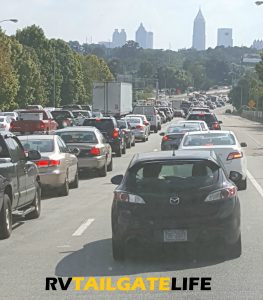 So this is my view on a Friday afternoon, on my way to campus. Lovely, isn’t it? It’s so much fun driving an RV in rush hour traffic. THIS is why tractor-trailers try to avoid it at all costs. 15-20 mph on a good day, with the AC running is wonderful on the MPG chart. I won’t even calculate it.

Good thing that Georgia Tech is right now saying that we won’t, officially, be able to get in our parking lot until 5:00 PM Thursday night. For a 7:30 PM kickoff. All of us will have to deal with this traffic, in RVs if that holds up.

You know how they say you can get a sunburn even on a cloudy day? Yeah, they are right. Ask me how I know? Yep, I forgot my sunscreen Saturday. And my hat. So my face is a little on the fried side this week.

So, as Baz Luhrmann told you – wear sunscreen.

Up next, Georgia Tech takes on Clemson in a Thursday night showdown in Atlanta. It’s also the “White Out” game where even GT steals ideas from other teams to create some excitement for a game. Highly ranked Clemson teams love coming to Bobby Dodd Stadium for a night game. Just ask them (hint: you won’t make friends with any Clemson fans if you actually ask them). We’ll have a pros and cons for Thursday night games post later this week.