The last week of the regular season is rivalry week for most college football teams. Many games featured the in-state rivals, like the Iron Bowl with Auburn-Alabama, the Egg Bowl with Ole Miss-Mississippi State, and the Civil War between Oregon and Oregon State. And of course, there’s Clean Old Fashion Hate between Georgia and Georgia Tech, which of course is where this Georgia Tech fan went this weekend in the rivalry tailgate edition.

There’s no love lost here. We hate each other. They call us Nerds and Little Brother. We call them Rednecks and make fun of the lack of education needed to graduate. Tech’s fight song damns Georgia to hell. And one of our other battle songs drops a battle axe on their head. Yes, there’s a bit of violence in this hate. Sorry elementary school teachers across the state for the cussing and the violence, but it is just how it is done here.

All this makes for a passionate rivalry weekend tailgate…

Games the weekend after Thanksgiving have some definite advantages: leftovers from Thanksgiving dinner make tailgate meals easy to prep and a lot of people have Friday off from work. This means you can take your leisurely time getting the RV packed up and on the road to your tailgate destination. But every other year, we have to go deep into enemy territory to watch the game.

Now, Georgia has a bit of a reputation, especially in the Clean Old Fashion Hate game. Many a Georgia Tech fan will not venture into Athens, Georgia, for any reason, not even a ballgame and not even a rivalry tailgate. But one thing about an away game tailgate, all your friends that are normally spread out all over your home campus usually come together in one spot for an away game. You’ll miss out on some friends but see others you haven’t seen in awhile. So these tailgates are always a bit different.

The Tailgate Continues During the Game 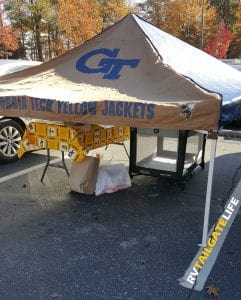 Remember how I said that some Tech fans won’t even go to Athens for the ballgame because of the harassment they have received in the past? One way I found that you can avoid a lot of the harassment is to stay at the tailgate! With the RVs and their televisions, satellite, and power supply, we’ve got a better view than most of the people in the game. And by staying at the tailgating, you don’t have to deal with anyone barking in your face. You also have all the adult beverages you need to hopefully celebrate the win but also if you need to drown your sorrows. No fear of having your flask confiscated either. (wait, did I just recommend that you take flasks of liquor in? Hmmmm) No lines for restrooms and a buffet of food.

Wait, why do we go to any of the games? There’s still a lot to be said for the games but all the pros in the world are not worth a lot of the harassment you’ll receive in Athens at a Georgia-Georgia Tech game.

What A Rivalry Game!

We usually don’t go into too much depth about the games here on the RV Tailgate Life tailgate recaps. But I do want to take a second to talk about this game. Tied at half. A sizeable lead by Georgia in the third quarter. Tech fans starting to get disappointed in the team and then Tech comes back with two late touchdowns. It was not quite as crazy as two years ago, with the Kick (to send the game to OT) and the Pick (to win the game in OT). But still, any win against your rival is a good one. And when you do it by one point with less than a minute left in the game, oh what fun! All their fans were still there, expecting to win. So it’s just another stab in the heart for them. Not a bad way to go into enemy territory for a rivalry game!

How Sweet Victory Tastes at a Rivalry Tailgate!

There’s not much better than a post-game tailgate after you’ve beat your biggest in-state rival! For those of us that stayed at the tailgate during the game, we got the party playlist going, and the post-game meal ready while waiting for everyone to return from the stadium. On a quickly cooling afternoon, chili was definitely on the menu. Oh, and a Crock-Pot peach dump cake topped with Cool-Whip. A warm cake was definitely the way to end the day.

For Tech fans this year, the early start (ugh! so over the noon games!) meant that we could sit back and watch the other games without a bunch of stress.

Championship Weekend Up Next

Georgia Tech had a rough patch there about a third of the way into the season and lost a few games. As such, Tech won’t be going to the ACC Championship. But since we are based in Atlanta, we do have the SEC Championship just down the road. Any Florida or Alabama fans want to invite us to join their tailgate this weekend?

How did you survive your rivalry tailgate? Comment below!