How to Upgrade to Digital Flat Screen TV in the RV

The 2016 football season was the third season with Starter RV. It was time to upgrade the old analog tube TV to a new digital flat screen TV.

Now, I’ve seen some horror stories and other RV tailgaters have told me some more stories about pulling out their old RV TVs and installing a new flat screen TV. So I went into this RV mod with a little trepidation.

After installing the new TV, I shouldn’t have waited so long! Maybe I was lucky, but this did not end up being as bad as I have been told.

In other words, this thing had to go! Even if the upgrade hadn’t worked out, at least I would have dumped the old TV.

No reason to haul it around, right? It was just dead weight to me.

The TV was an old, probably original to the (1990) RV. It wouldn’t work with a digital antenna and was pretty much just taking up space.

It was bulky and useless. Not even good for a doorstop since it was up in the cabinet over the driver compartment.

Before You Start: Buy the Digital Flat Screen TV

First, I had to research TVs. There’s not a lot out there in the small TV space that is suitable for an RV.

My biggest constraint was size: I was limited to a physical space of 21 inches by 15 inches.

That included the screen, any speakers, and any extra side space.

Even though this is a small RV, with no slides and thus limited areas to watch the TV, I did want to maximize the viewing area.

I did not intend to use the DC compatibility since it is a cigarette lighter (and that would plug into my engine battery, not house batteries).

But otherwise the SuperSonic TV fit my space criteria and had a bonus DVD player. This TV comes in at just under 7 pounds, so weight-conscious RVers should love it.

Whatever you do, don’t get a plasma TV for an RV. They will not do well with the shakes, rattles and rolls common in an RV. That leaves you with the LCD/LED TVs.

Before You Start: Buy the Wall Mount

The next step was to determine how to mount the TV to the RV.

As many RVers know, mounting is one of the toughest things we deal with – the walls are thin and anything heavy is likely to bring them down.

Using screws on the thin walls is generally frowned upon because of the wiring; who knows what you will hit.

Fortunately, since I was taking the old tube TV out, I could mount the new digital flatscreen TV inside the cabinet.

The cabinets are generally stronger and sturdier than the walls.

I went with the Travel TV Wall Mount.

Things to look for in a TV mount for your RV:

I personally did things out of order from what I’m recommending here to you.

I probably should have done this before I started everything else, but then again, it would not have mattered if things did not work. The old TV had to go, even if I was left with an empty cabinet. At least I’d be hauling around that much less weight in the RV, right?

But before you begin ripping out the old TV to install a new TV, you should test the new TV first.

Three Things to Test before Installation in Your RV 1. Does the new digital flat screen TV work? No reason to put everything up there just to turn it on and it not work. Make sure that the remote works with the TV as well. Test all this out before you go any further.

2. Can you get antenna reception through the TV? The SuperSonic digital flatscreen TV could not pick up any over-the-air channels without connecting to an external digital antenna, even in suburbia Atlanta.

Fortunately, I had one of these on hand, but if you don’t, add it to your shopping list.

3. Does the TV mount fit your TV? You’d be surprised how many TVs don’t line up with a standard VESA mounting pattern.

Just test it before you go any further. I went ahead and attached the wall mount arm to the TV at this stage. This is also a good time to string the security strap between the digital flat screen TV and the mount. More on that later.

Don’t want to install a TV? Keep your RV TV portable and protected with the MyTCase No better time to work on the RV than a Saturday afternoon in Georgia when it is hovering around 95 degrees, right?

First things first, cool off the RV so you don’t die of heat stroke! It was only 106 degrees when I first stepped into the RV.

Good time to pull the RV out of storage, run the engines and generators and make sure everything is running well.

And to check out the awnings since shade is good. And if you are like me, you probably need to air them out anyways after storage. OK, enough of that and back to the TV.

See Also: Tips to Stay Cool at the Tailgate

The old tube TV was held in place in two ways – well, kind of.

In the picture above, you can see the safety security strap hanging down, so it wasn’t doing much to hold it up.

Thus, the only thing really holding it in was the framing around the TV, secured by two rusty screws. Yikes!

But those were easy enough to remove and then the TV slid right out. The toughest part of getting the TV out was tracing the power cord behind the cabinet to the one beside it.

Bye bye old tube TV! Hopefully the trash guys will pick it up this week!

One thing I was a little surprised about was the metal floor and straps providing extra support for the old tube TV.

The security straps were also screwed into this metal plate, which comes in handy later on for securing the digital flat screen TV during transit (the last thing I want is for the TV to come down and end up on my head while I am driving).

Installing the Digital Flat Screen TV in Your RV

First things first, we need to install the TV mount.

You’ll follow the instructions for installing your TV mount.

Installing the Travel TV Mount was easy, with a built in leveler (make sure your RV is level if you rely on it).

Since this mount has two “docking” stations and you attach the arm to it after installation, remember that you’ll need more clearance room for the arm to fit over the docking station.

I had plenty of room in the cabinet, but did not consider that the slope of the ceiling outside the cabinet could be a problem. It worked out, but I do recommend installing it at the bottom of the cabinet to be sure you have the proper clearance to get the TV into position. After the docking station was in, it was just a matter of slipping the arm and digital flat screen TV into place.

Once in place, I ran the AC power cable back behind the cabinet into the power area next to it.

Then, I attached the old coax cable that was already in place to connect with the digital antenna, which I placed in the power area. This way, I can either (1) easily upgrade the antenna later, if needed, (2) move the antenna to a better location for reception purposes, and/or (3) add DISH satellite TV.

If I stuck it behind the TV, it would be difficult to move or upgrade.

More Tips for Installing Your New TV in Your RV

While the Travel TV Mount comes with a security strap, I used the ones that were in place, previously for the old tube TV. While they were a little dusty and grimy, they were in good shape and didn’t require additional installation work.

After getting the TV installed and working on securing it, I realized that the best way would be to string the strap between the TV and the VESA mount. This took some work because the space was tight – I ended up removing the arm mount from the TV to get it through. But I am more confident now that the TV will not end up on my head while going down the road, even if the wall mount fails.

By accident, I found out that the back of the TV actually fit nicely into the cutout as long as I didn’t put the framing back up. This also will help take the weight and force off the wall mount, making it less likely to fail.

When you install the TV, make sure to tilt it for the best viewing angle from your sofa or other likely viewing locations. You typically won’t be watching the TV by standing directly in front of the TV. Instead, sit on the couch and set the viewing angle that way.

Things Still To Do There will be a trip to Wal-Mart tomorrow to see about getting an adapter for the audio.

Remember, this is a 1990 model RV. The technology has changed a bit since then, including TV connections.

The old TV had only one audio out to the RV audio system, so I’ve got to look for some adapters.

Also, I need to get one of those smart power strips so that I don’t run down the house batteries when I’m not using the TV. This wasn’t an issue with the old TV since I just had it unplugged.

But now, I don’t want to be standing on my head to plugin/unplug the TV every trip. As tailgaters, we don’t stay in place long enough to not worry about it.

See Also: Organize Your K-Cups in Your RV Kitchen

As you probably know, in November 2017, I traded in Starter RV for a new Tiffin!

When I traded in the old RV, I left the new TV inside. At that time, the mount was still going strong and no problems with the TV!

Hopefully, whoever became the new owner of Starter RV enjoys the TV (assuming the dealership didn’t just salvage the parts and killed off the whole thing).

Have you upgraded the TV in your RV?

This was an easy DIY RV upgrade for me, but I’ve definitely heard horror stories from others where it was a lot more difficult.

How did the upgrade go for you? 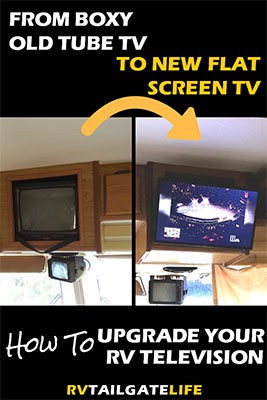