Not every trip we take is for football or even sports. There’s so much to see out there in this big world of ours, we would be remiss to not share it with you. First up, the Badlands National Park.

The Badlands and the national park is home to interesting and dramatic rock formations. Located in South Dakota, the park is out of the way for many Southern football fans. However, if your travels take you to South Dakota, you will not be disappointed if you take the time to see the awesome rock-scapes in the park.

You could spend days getting lost in the fossils and other hikes. Or you can take advantage of the Badlands scenic loop road, Highway 240, to see some amazing views in just a few hours. The choice is yours. Whatever you do, though, don’t forget your camera.

A Trip Through Fly Over Country

In June 2012, I had the chance to see some bucket list places, including the Badlands, on a cross-country drive with my friend Heather. Are you hearing Jason Aldean’s Fly Over States about now?

Once you’ve been to the Badlands, you’ll totally understand the song a little more.

Here are some of the highlights from one day in the Badlands National Park in June 2012: 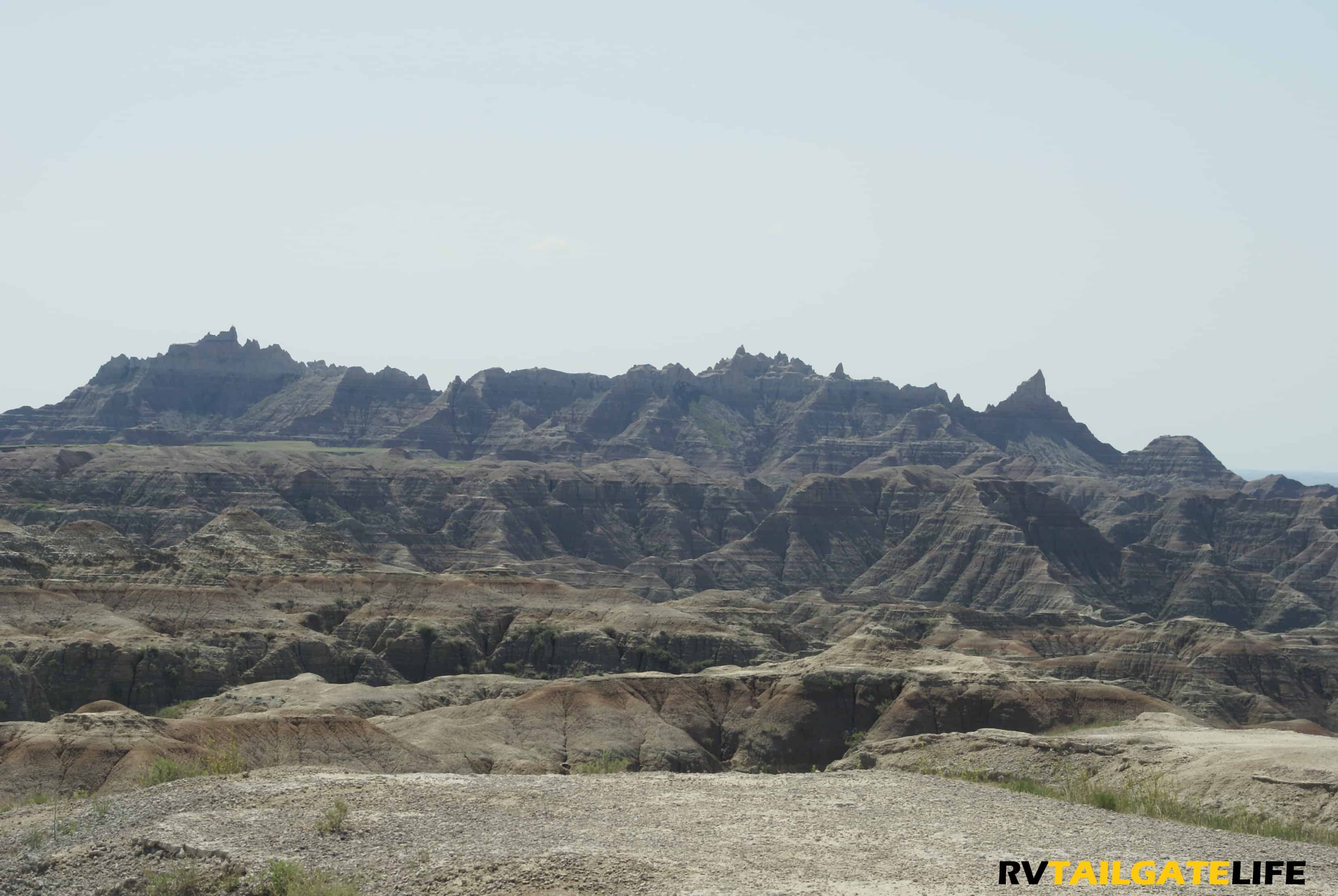 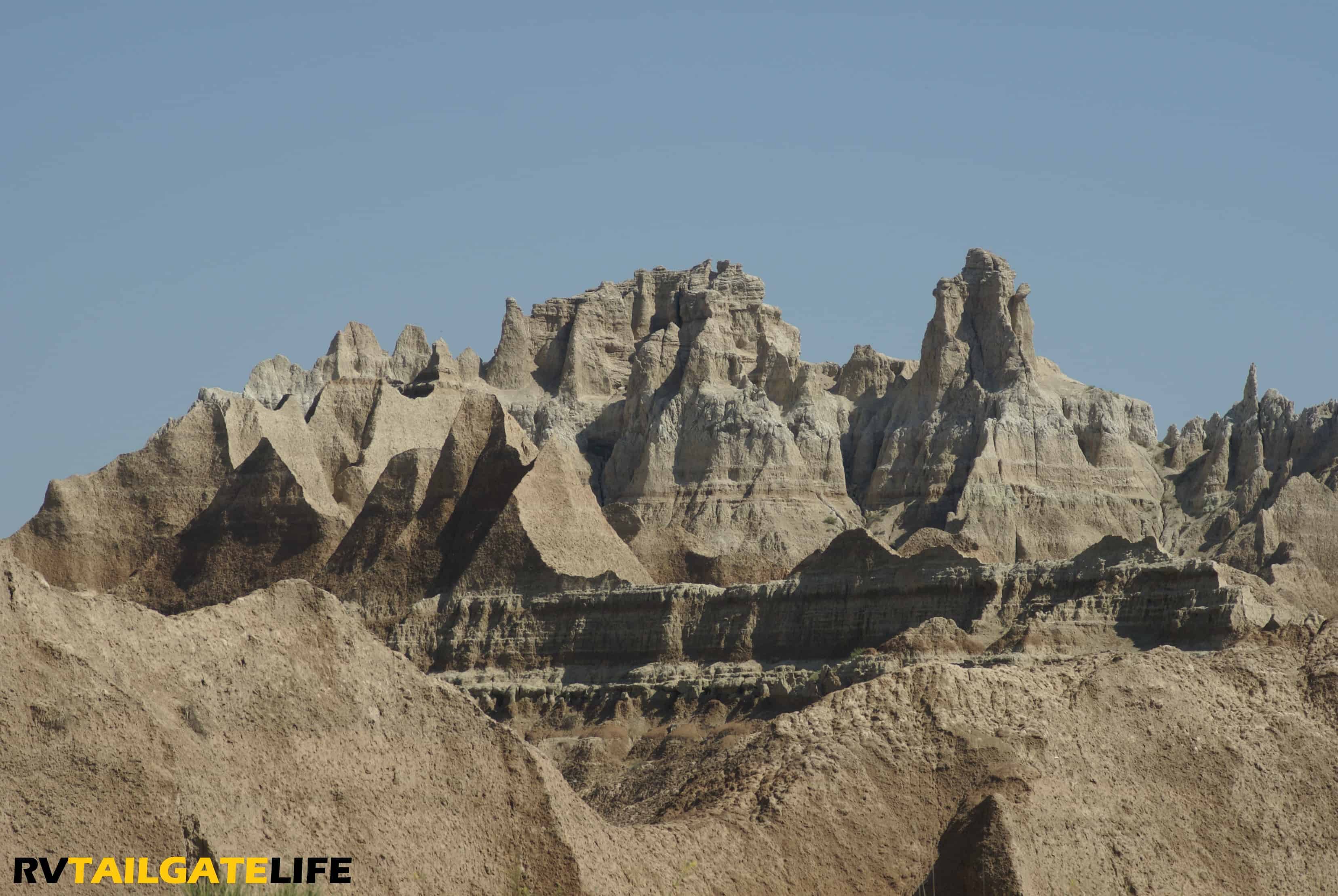 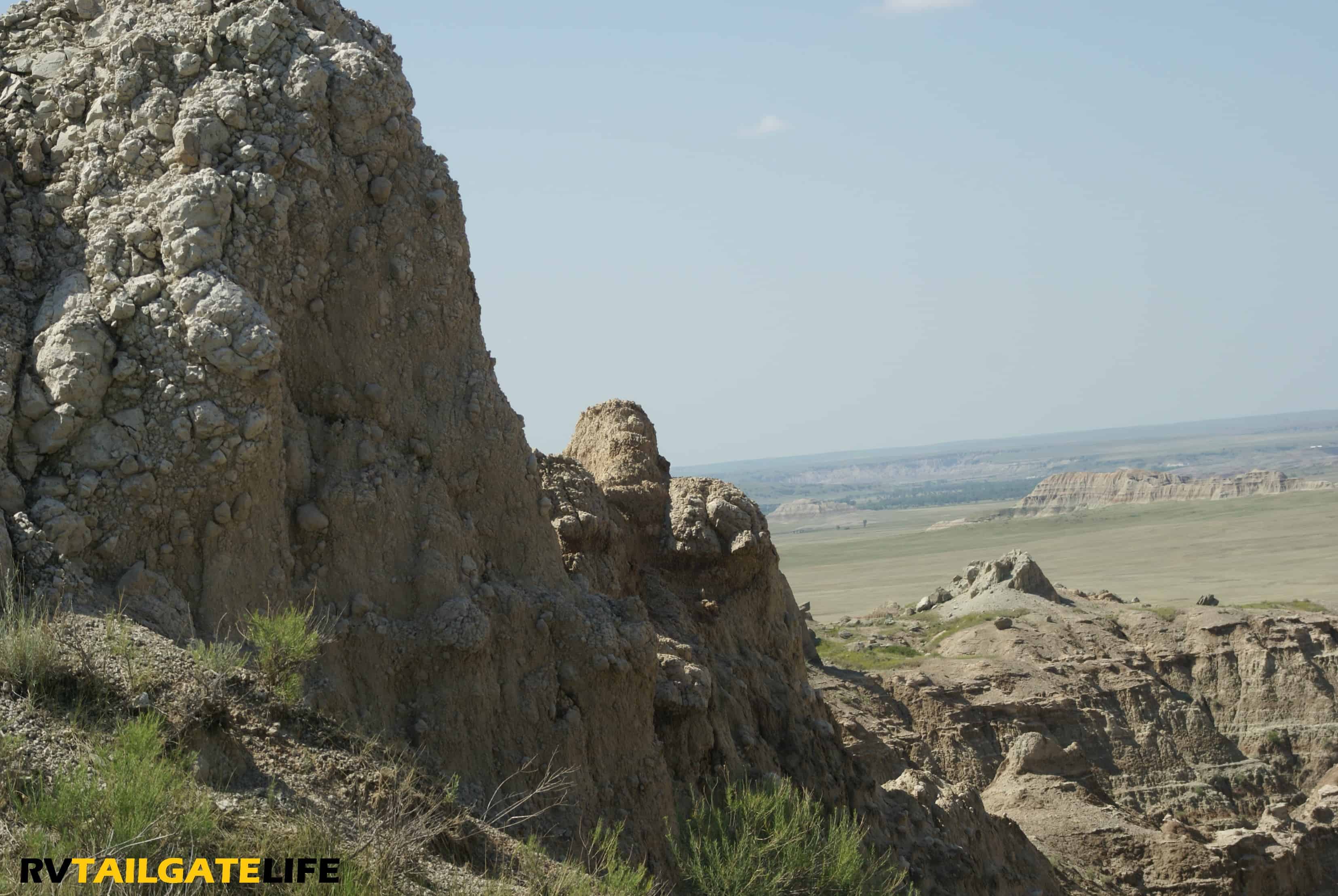 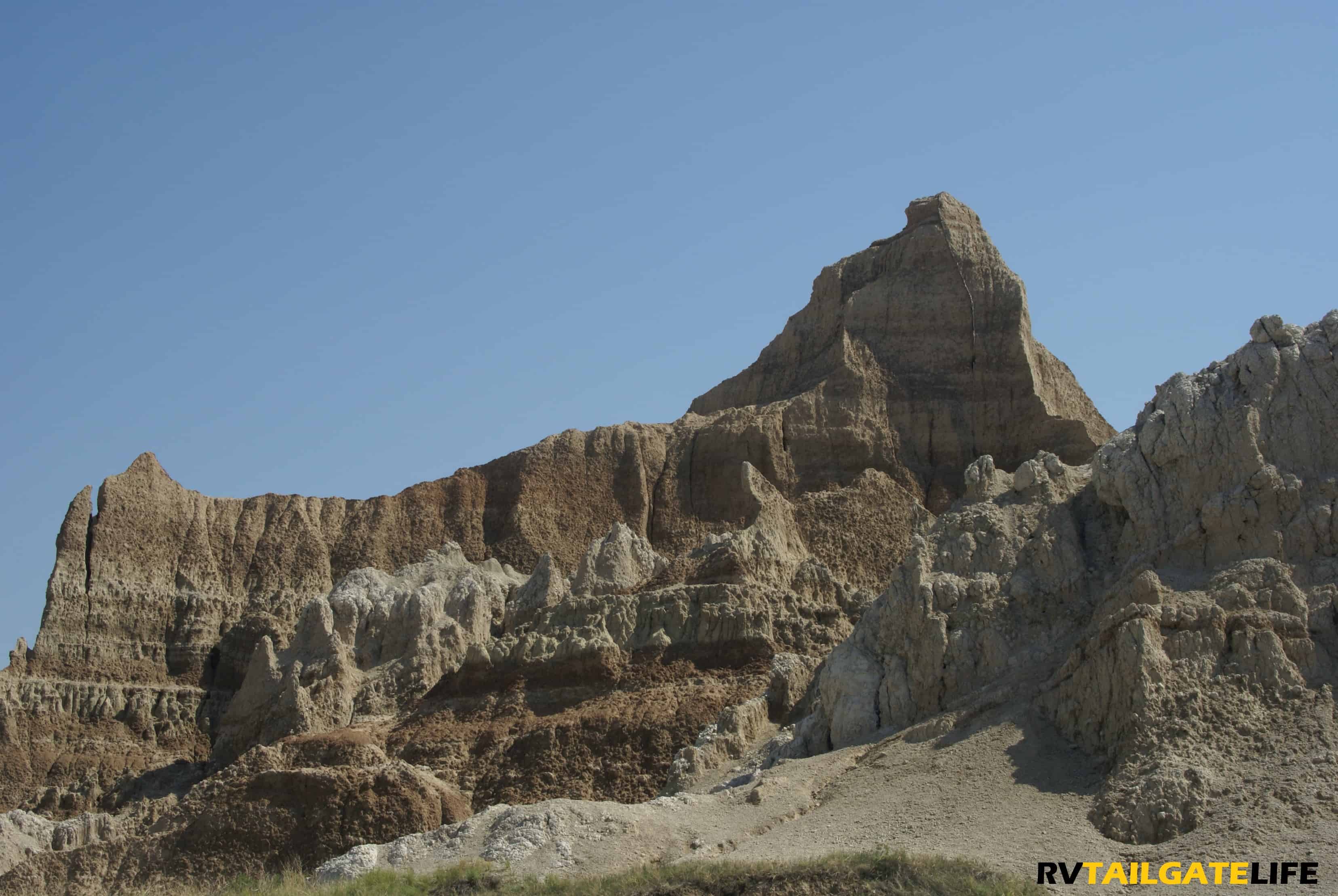 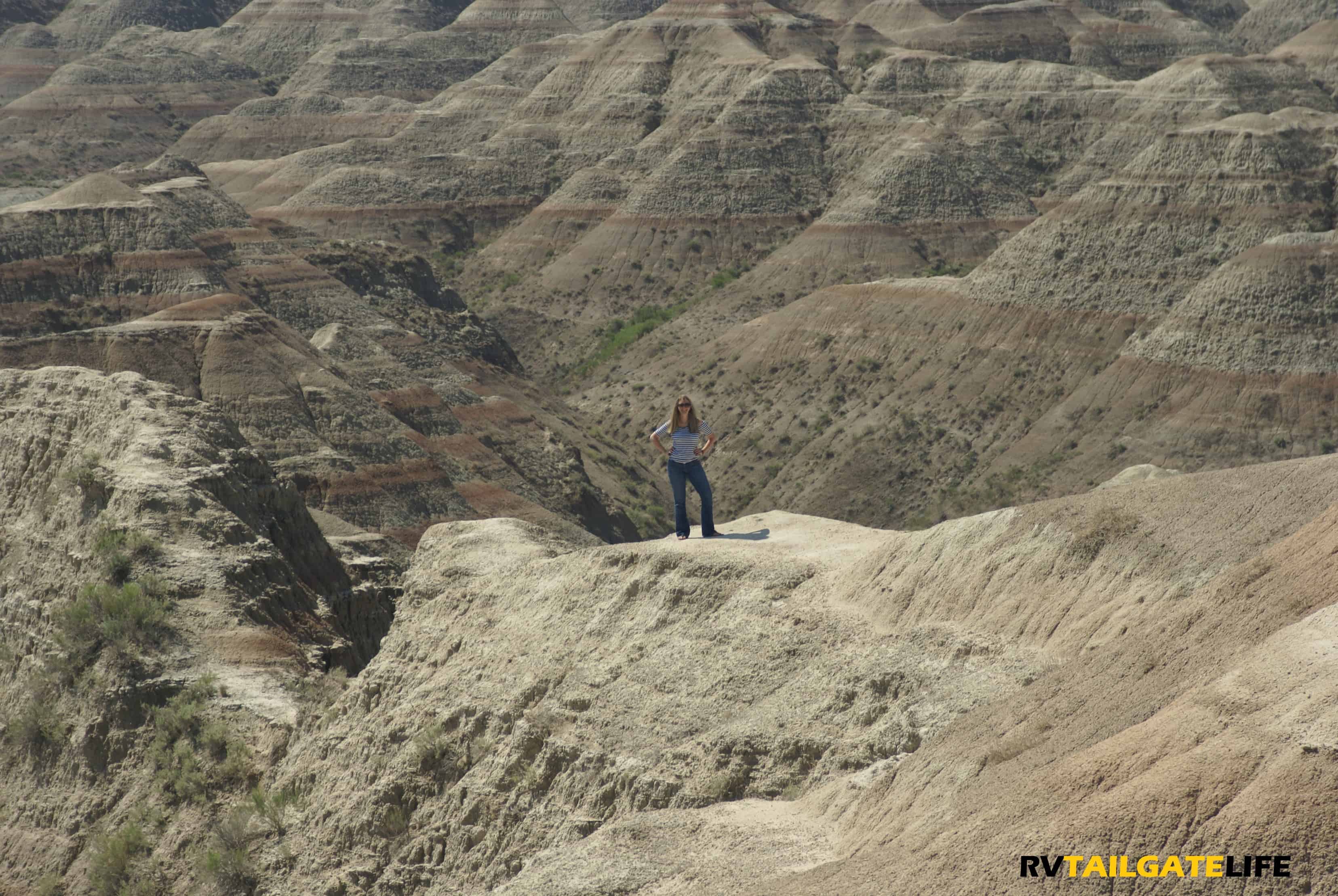 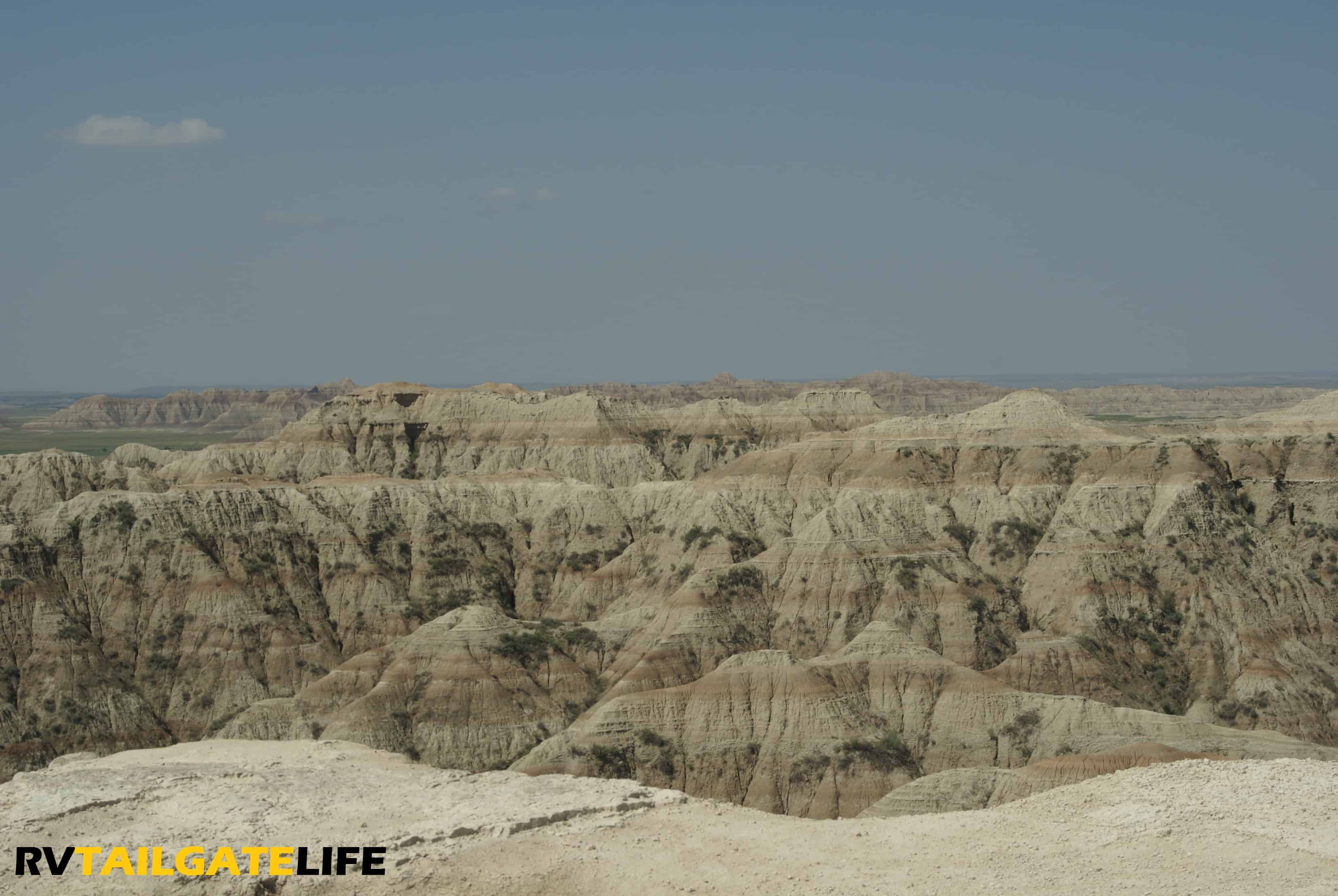 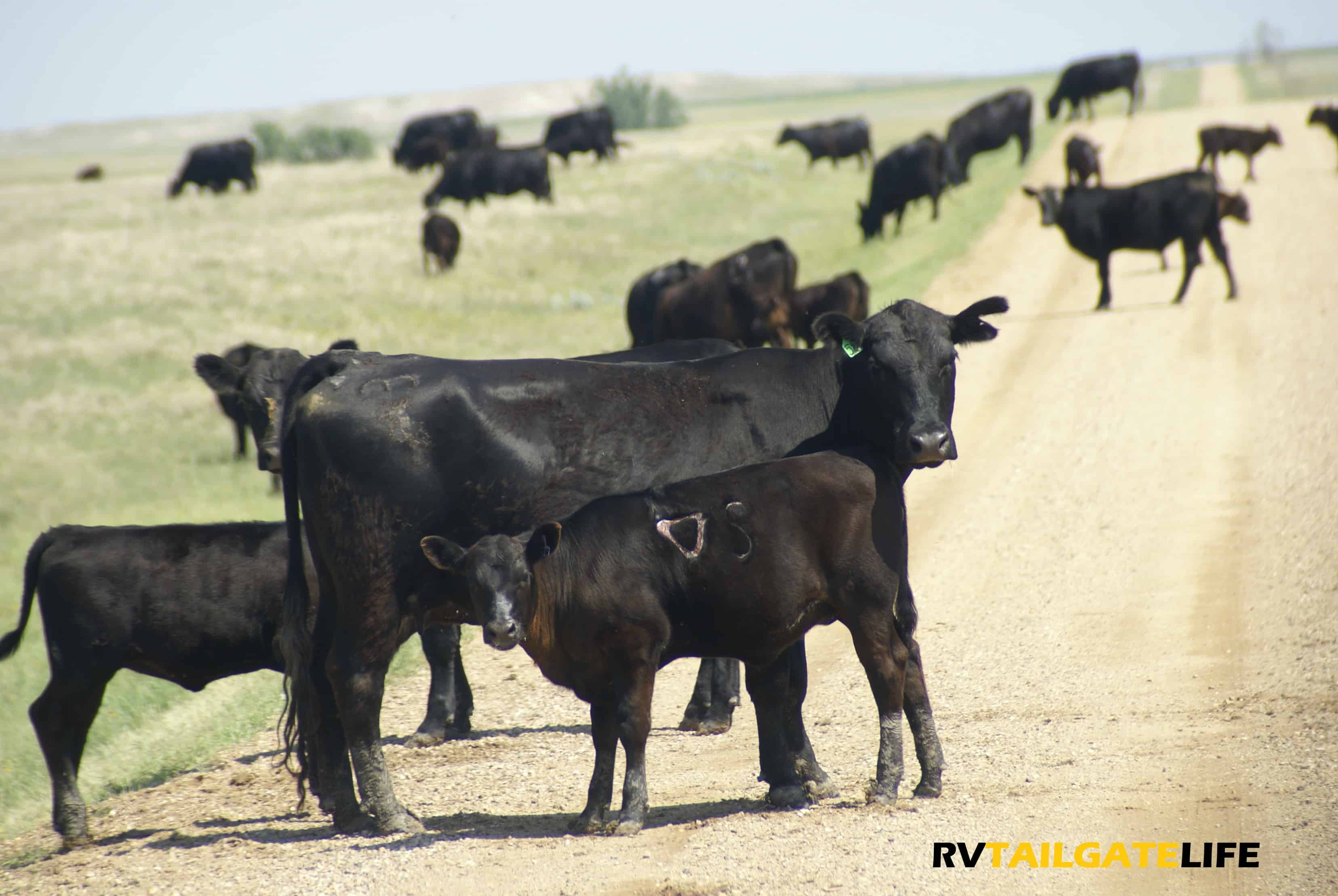 Mama, Don't Let Your Babies Grow Up to Be Cowboys
The map said take the next right, but little did we know that the road would turn into a dirt road full of cows. Mama cow wasn't too appreciative of this car coming towards them. Don't worry, no cows nor humans were damaged in the making of this roadtrip. 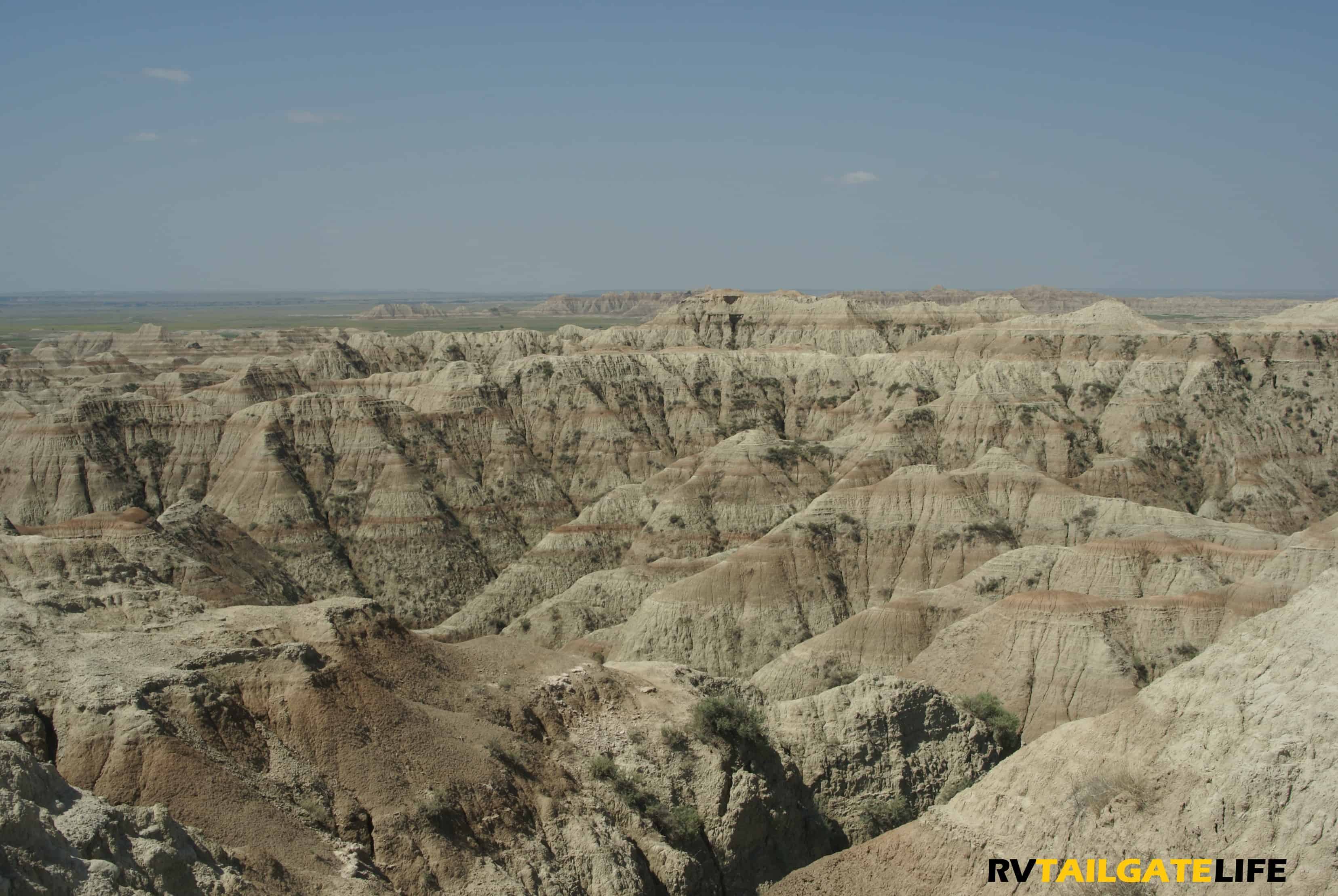 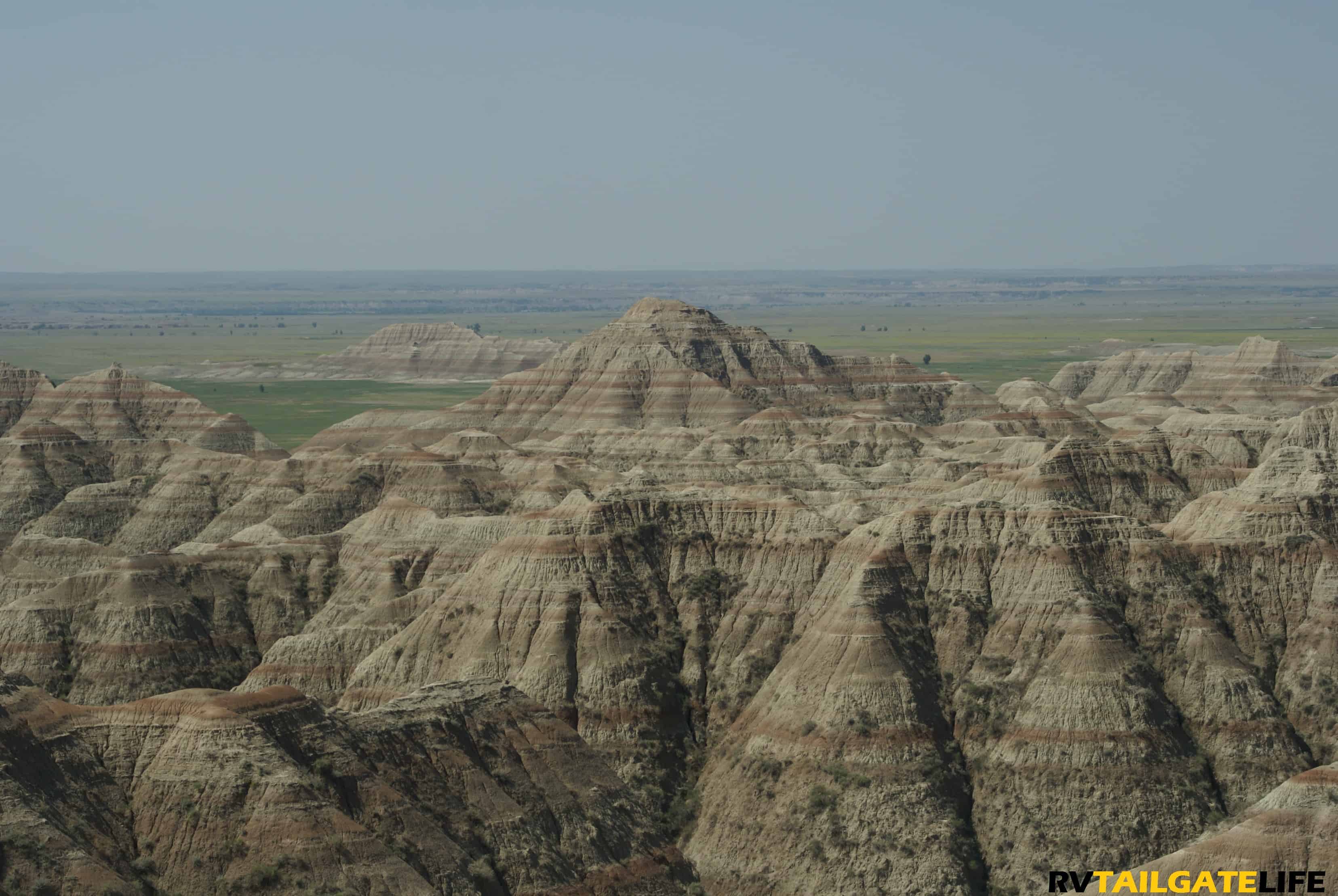 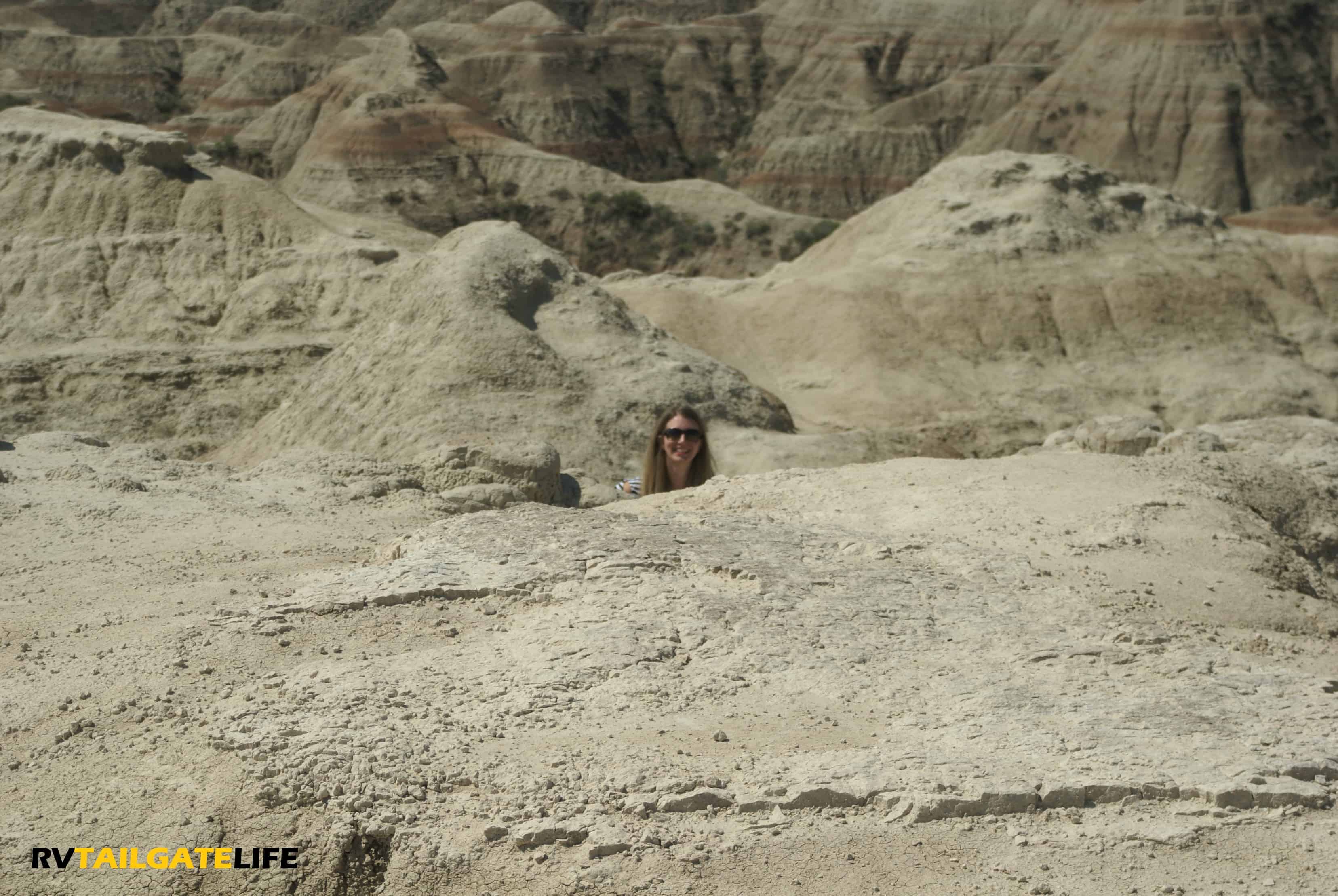 Peek A Boo
Heather pops up over some rock formations in the Badlands National Park.

The pictures really do not do this park justice. 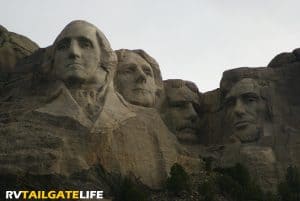 When visiting the Badlands, be sure to take trips to Mount Rushmore National Memorial.

We visited Mount Rushmore on day one of our cross-country drive back to Georgia. On day two, we visited the Badlands. In the late afternoon, we definitely felt the “freedom on your face” as we drove across South Dakota, headed east.

I definitely recommend seeing Mount Rushmore in the evening, both for some incredible pictures but also for the lighting ceremony. Be careful on the winding roads getting up and down the mountain areas. They can be hazardous in the dark or in poor weather conditions. And don’t forget about the wildlife in the area. Take your time getting up and down the roads.

The United States National Park System is truly an American gift to the world. America sets an example for preservation and education through the park system. With over 300 million recreational visitors, the park system is truly an exceptional way of highlighting the natural attractions of our country. 2016 marked the 100th anniversary of the national parks.

If you are going to be visiting several national parks and other federal recreation sites, you should consider the annual pass. The pass is just $80 (seniors can buy a $10 lifetime pass) for a rolling 12 month pass. If you are out visiting the Badlands, good chance you’ll be hitting up a few other National Parks on the same trip. The annual pass is also great for those RV tailgaters that want to take their RV out during the non-football seasons.

We hope to see you in the parks this football off-season!

Have you visited the Badlands National Park? What was your favorite part? Comment below!