It might not be football season, but that doesn’t mean that we can’t spend a weekend RV tailgating. So let’s spend four plus days at Atlanta Motor Speedway for a weekend of NASCAR tailgating! 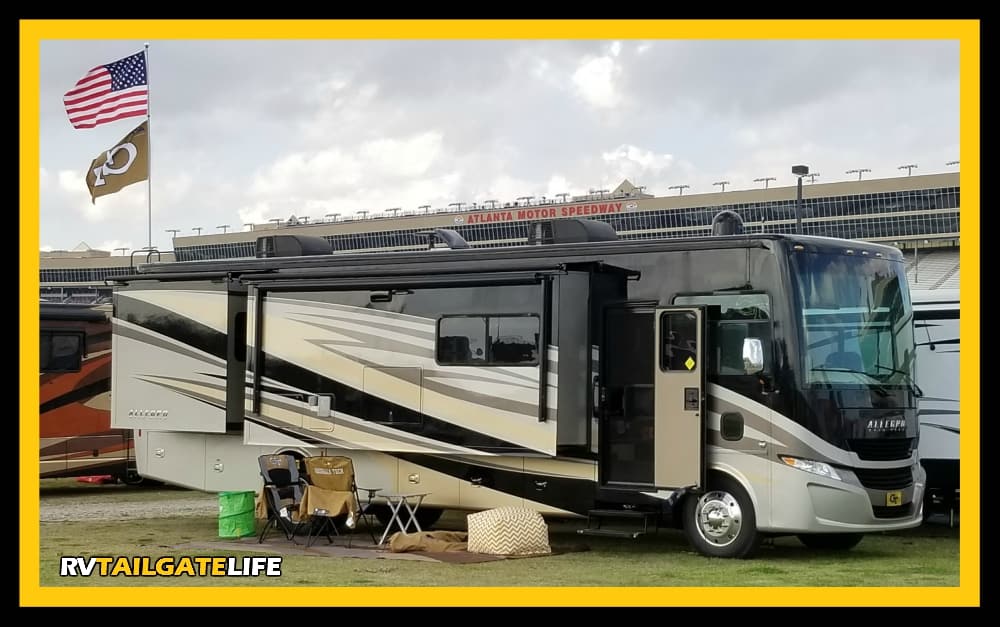 The Infield is the Place to Be

It may cost more to be on the infield, but it’s really the best way to go.

First, there are no lines at the bathrooms! And cheap, cold beer right there in your RV fridge! Rainy weather in the forecast? Just go in the RV and hang out until the rain passes.

The infield has the best views of the race too – right on top of your RV!

On Saturday, when there are two races – the Xfinity series and then the truck races – you have somewhere to hang out between the races. You can escape the crowds, fix something to eat or take a nap. Not bad when you are nursing a hangover from an epic night of partying the night before.

In other words, spend the dough and tailgate in the infield! 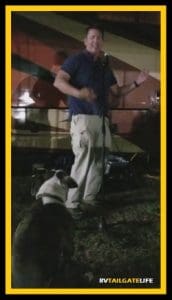 The infield also has the best party. After the sun went down and the cars were all buttoned up for the night, the tailgate karaoke started up!

For the sake of the not so innocent, there will be no videos for your amusement. But to my friends and fellow tailgaters, do know that there is video evidence!

Big props to our friends Dan and Christine for DJing the karaoke! And bringing the stereo equipment too.

How do you describe a tailgate? How about eating, drinking, and planning the next eating and drinking.

Our menu for four days of tailgating included:

Saturday Dinner: Steaks, salad, and crab stuffed potatoes. We had a bigger crowd than expected as we invited some neighbors to join us, so we also added in some leftovers from the other meals, including the mac and cheese and added another pasta salad to the mix.

If you leave our tailgate hungry, you are just doing it all wrong.

Tips and Things to Know About NASCAR Tailgating

Before you go in, your RV will be searched. No firewood, no fireworks, no firearms. After your RV is searched, they will give you a pass that will be turned in before going to the infield. I heard stories about how at other racetracks, they will even look under the bed to make sure that you aren’t sneaking people in.

You will also need a wristband for each person in the RV or group. Buy these ahead of time for $50 or day of for $70. Don’t make my mistake and forget to buy a ticket before. With this wristband, you can come and go though. So you can leave to visit the Fan Zone, visit friends that are camping outside the stadium, or go pickup some forgotten items from the nearby Wal-Mart, grocery stores, and liquor stores. It is quite convenient to have a car pass as well for these tasks.

The infield opened about 2:00 PM on Thursday, but many of the RVers met up at a staging lot across from the infield entrance tunnel. This let track security personnel search the RVs and make sure everyone had a wristband.

To get to the infield at Atlanta Motor Speedway, you go through a tunnel. A pretty tight tunnel. You shouldn’t have any trouble getting through, unless you are oversized even for an RV. This is the same tunnel that the 18-wheeler haulers go through to bring the cars and other equipment into the track. In any case, you will want to take it nice and easy to get through there.

During the NASCAR Tailgate

Bring extra tennis shoes and a pair of rain boots. The lot is a mix of grass, gravel, and dirt. So if it rains, like it did this weekend, the ground will be a mess. And with all the walking you will do, you will want a pair of dry tennis shoes.

Race officials did come by just prior to the races to ask everyone to lower their tailgating flags. Something about the spotters needing to be able to see the entire track. *wink*

Conserve your water and your gas. There are companies that will pump out your waste tanks and refill your freshwater tanks. But it’s expensive. About $50 to pump out and another $50 to refill. And no one is bringing gas or diesel around if you run out. There was an RV repair company on site to do some emergency repairs, if necessary.

Don’t worry about dress clothes. You won’t be needing any of them. Leave the heels at home too.

And yes, there will be people that leave before the race is over.

If possible, plan your NASCAR weekend so that you have Monday off. It is so much easier driving out in the daylight, after a full night’s rest. You have until noon on Monday to clear out.

Don’t forget your earplugs! Seriously, when the drivers are really pushing their cars, it is LOUD. Even inside a new RV, it is still really loud. At a minimum, you’ll want disposable foam earplugs. Spend just a bit more to get ear plugs on cords so that they can hang around your neck during quieter periods. Because who wants to stick a foam earplug in your ear after you drop it on the ground. Eeewww!

You can also go with a scanner and headphones if you want to listen in on the conversations between the driver and his crew. It’s a cool way to hear behind the scenes and get an insider’s listen on what’s going on during the race.

At Atlanta Motor Speedway, you have about 15 feet to park your RV in the infield. Including slides. RVs are literally on top of each other. For safety reasons, you will need a Genturi – an RV Generator Exhaust System – on your RV generator. These systems re-route the generator exhaust from the lower levels next to the RV to up and over the RV. This helps prevent the build-up of dangerous carbon monoxide inside the RVs.

With such tight spots, it is not unusual for a group of RVers to get together to buy more spots than RVs. This gives you some room to spread out and setup grills, chairs, and what not.

At a minimum, you’ll want a pop-up tent. You can go with a EZ Pop-Up tent or a larger Party Tent. Whichever way you go, make sure that you get the sidewalls to protect you from the inevitable rain.

In the infield at Atlanta Motor Speedway, you can use stakes to keep the tent from blowing away. It is not a bad idea to supplement with canopy weights. I keep these in the RV for use with the pop-up tents when we are parked on asphalt or whenever you can’t use stakes.

Went to a Tailgate and a Race Broke Out 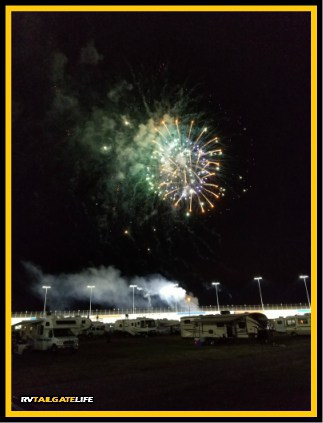 I’ve never been a big fan of NASCAR. I have usually been vaguely aware just because I live in the South around a lot of fans. But I don’t have a driver to root for and I don’t follow the sport closely. But that doesn’t mean I didn’t have a ton of fun NASCAR tailgating.

I’ll definitely be back next year!

And now I want to see Talladega and Daytona for more NASCAR tailgating! 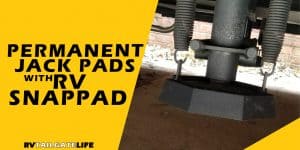 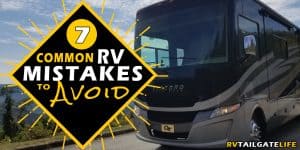 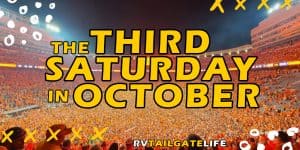