Monkey bread cupcakes are a twist on traditional monkey breads, but are great for serving up at tailgates, homegates, picnics, or other large crowds.

These monkey bread cupcakes are also great as a dessert in addition to a breakfast or brunch tailgate.

They are so easy to make, you can bring in even little kids to help. 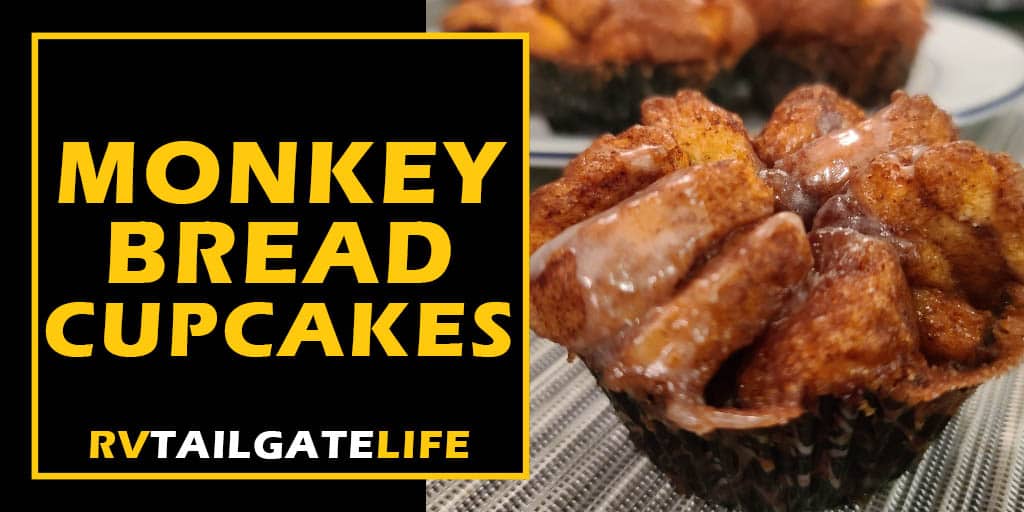 What is Monkey Bread?

Monkey bread is a pull apart bread, named after how a monkey eats.

Have you ever seen a monkey eat? It’s like they take small bites, picking apart a fruit.

And that’s what you do with monkey bread.

Most monkey breads are made with regular biscuits, but I make mine with cinnamon rolls. Because yummy! Who doesn’t want that extra cinnamon baked right into the middle of the dough. But if you only have some biscuit dough that you need to use, you can use that too.

Monkey Bread Cupcakes are Great for Tailgating and RV Breakfasts

Monkey bread is traditionally made in a large bundt pan like the one on the right.

But who wants to store a bundt pan in the RV? Muffin pans are bad enough, but bundt pans are pretty bulky and it is hard to pack them in small spaces. That’s why monkey bread cupcakes are a winner over a traditional monkey bread.

Also, cupcakes are a lot easier to serve up to a crowd than a bundt cake is. Each person can take their own monkey bread cupcake instead of having to pull apart a serving from a larger group.

And now that we are all a lot more conscious about people touching our food and possibly contaminating it, the fewer serving spoons and people touching it the better, amiright?

Let’s Get to Baking

This is a really easy recipe.

Before you get started: You’ll want a pair of kitchen scissors (make sure they are clean, in case someone used them from the kitchen and put them back before washing them) and a small bowl to mix your dough in cinnamon sugar. Then a muffin pan with cupcake liners. A small microwavable bowl to melt the butter and prepare the glaze. A few measuring spoons, and you’ll be ready to go.

Oh yeah, and preheat the oven to 350 degrees. 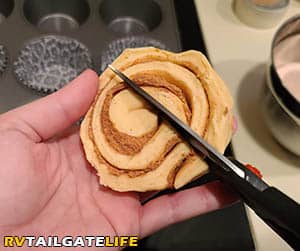 Mix up the cinnamon and the sugar in a small bowl.

Roll each piece into a small bowl and dump into the cinnamon sugar bowl. 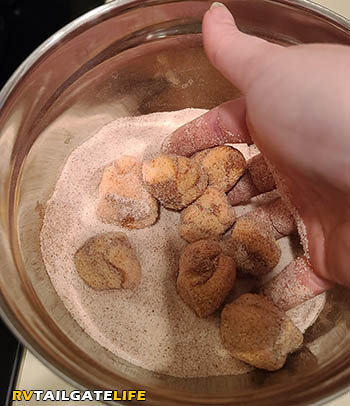 Mix the pieces up really well so that they are covered in cinnamon sugar.

Then place five of the small cinnamon roll balls into each cupcake tin.

Repeat with each cinnamon roll. 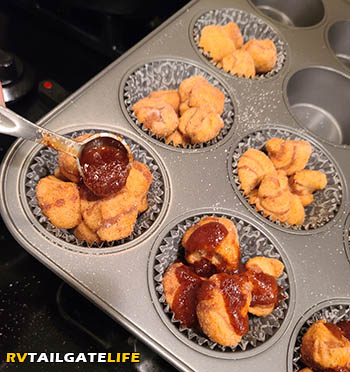 In another small bowl, melt your butter, add the brown sugar, and more cinnamon. Mix well and then spread evenly over the monkey bread cupcakes.

Pop these babies into the oven for 20 minutes on 350 degrees or until the cinnamon rolls are cooked through. (Don’t be surprised when your RV starts to smell like cinnamon and sugar. You will be so hungry by the time these are done baking! I warned you!)

Then, take them out of the oven and while still hot, add a dollop or two of icing to each muffin.

You can serve them up right away. And everyone will love them, trust me! 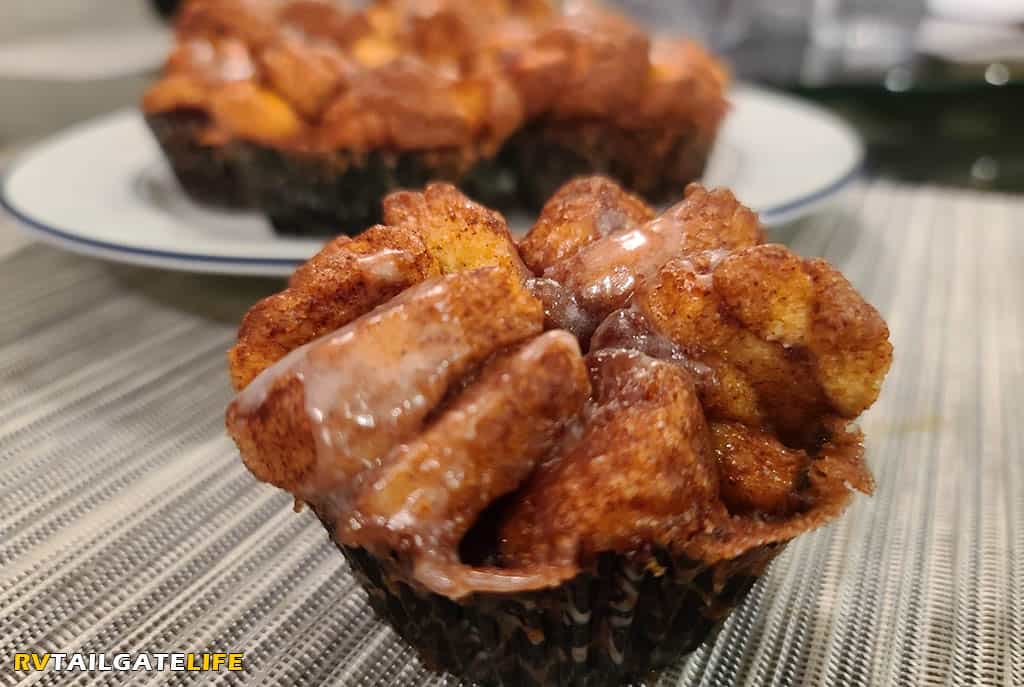 If you are going to be making multiple batches of monkey bread, there’s good news… you don’t need all the sugar and cinnamon from the “batter” for the additional batches.

You’ll have plenty of cinnamon sugar leftover from the first round.

However, leave the cinnamon rolls refrigerated until you are ready to cut them up and prepare the dough. The cinnamon becomes sticky and the whole mess is harder to work with as they warm up to room temperature.

Did you make this recipe? 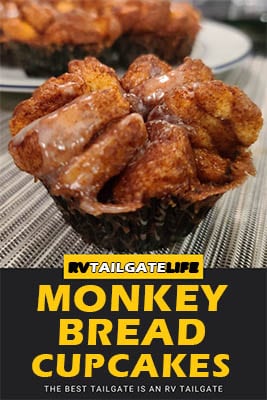 You may also like:
Easy Tailgating Desserts for You to Try
Bacon Crack Snacks Go Fast During Tailgates
All the Tailgating Food and Recipes Things