Jacksonville Tailgating at the TaxSlayer Bowl 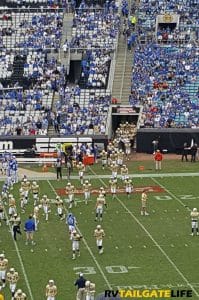 The bowl season saw Georgia Tech, and the RV Tailgate Life, visiting Jacksonville, Florida, to participate in the TaxSlayer Bowl. Or what you probably refer to as the Gator Bowl. New Years Eve with a bunch of friends in a place where we can drive and thus take the RVs? Count us in! You had us at Jacksonville tailgating.

One thing that I do know – 11:00 AM kickoffs are for the birds. As an Eastern Time Zone fan, it is not normally something that we have to deal with. It totally kills the pre-game tailgating atmosphere. People are doing good to get there and into the stadium before kickoff. Forget making and eating a big meal before the game! Or even getting a good buzz going.

Props to the Kentucky fans for making the trip. From our vantage point, the Kentucky fans filled the lower sections on their side and a lot of seats on the Georgia Tech side too. Although boo to the Kentucky fans on the GT side that just wanted to start a fight, trying all game to get the Tech fans to rise to the bait they were spewing. Sorry, but when your team is behind all game long, don’t be calling the other team weak or trash. It doesn’t look good for you.

The TaxSlayer Bowl is held at Everbank Field, home of the NFL’s Jacksonville Jaguars. EverBank Field is on the site of the historic Gator Bowl Stadium and even incorporated some of the old stadium in its design and construction.

I’m still not sure how I would like to be swimming, or at least lounging, in a pool, while watching the game, and end up on the big screen TV. The pools were part of the stadium’s $63 million overhaul by new Jaguars team owner Shad Khan. On New Years Eve, it seemed to be mostly kids hanging out in the pool. It was pretty chilly and they tell me that the pools are not heated. Guess kids were the only ones crazy enough to go swimming. 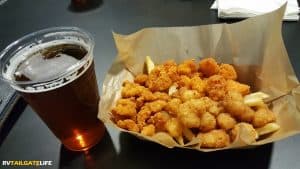 With an 11 am game and no time for pre-game tailgating meals, you have to eat in the stadium. The food was pretty good. At $12 a basket, the seafood trio was more than enough food. Depending on how hungry, there was probably enough for two. But instead, we got two and left almost all the fries and even some of the seafood. Of course, the $14 beers were your typical NFL stadium overpriced affairs. 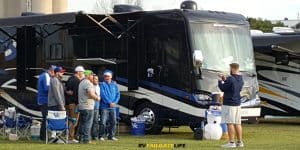 Wonder if the Kentucky fans realized that the guy they asked to take their picture was a GT player. Definitely had Kentucky team spirit at their RV in any case.

Both Georgia Tech and Kentucky RV owners parked at Tailgaters Parking. Probably because it was a matchup between teams that don’t normally play each other and aren’t rivals, there were no issues that we saw between the Georgia Tech and Kentucky fans. But I could see how things could get ugly during say a Georgia-Florida weekend if you weren’t careful with your parking arrangements.

Overall, the cons are what you would expect for a weekend tailgating spot and you are probably used to them anyways.

In talking to the friendly golf cart driver, he said that Tailgaters Parking is booked for the 2017 Georgia-Florida game. So hope you already have your reservations if you are planning on going to that game in 2017.

Driving Tip: use the address on the parking pass for your GPS. If you try to put in the company name, you are likely to end up in other lots not suitable for your RV. Also, there lot is at the dead end of Bryan Street and Duval Street. No turns needed, despite what the GPS will try to tell you.

If you aren’t taking your RV to a game at EverBank Field, there are lots of surrounding parking lots that aren’t Tailgaters Parking. For TaxSlayer Bowl purposes, there were plenty. But for Georgia-Florida, these lots would be full. Plan accordingly. 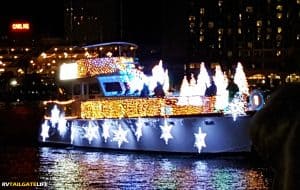 The Jacksonville Lighted Boat Parade was historically held Thanksgiving weekend, but they moved it this year to coincide with the TaxSlayer Bowl. The Boat Parade features local boat owners that decorate their boats in holiday spirit for a night time cruise around the Landing area. You can watch from either side of the St. John’s River.

If you are planning on eating before, during or after this event, you will definitely need reservations. All the area restaurants were full or had 90 plus minute waits. We know because we tried to get tables for immediately after the parade. Oops! Back to the RVs for burgers!

The Parade concludes with a fireworks display – so yep, we got to see fireworks on Friday and Saturday nights!

How was your bowl game tailgating? Discuss!

Did you enjoy your bowl game tailgating experience? Regardless of what happens on the field, you can always win the tailgate!