RV tailgates can be long affairs, days and days of tailgating.

And you’ll want some entertainment and that means games. Beer pong is a great way to entertain.

But boring old beer pong is so last year. Now, you can get the Infinity Beer Pong table and light up the night tailgate, all to the beat of the music.

And you can save 10% off your very own Infinity Beer Pong Table! 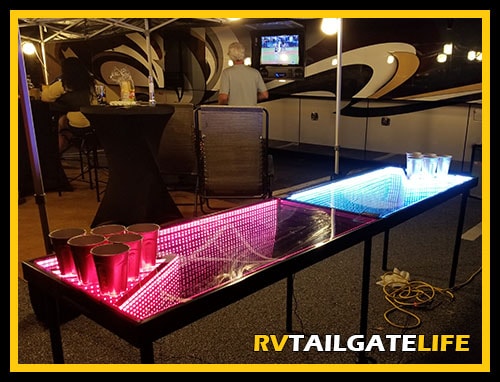 The Infinity Beer Pong Table is pretty darn attractive for a tailgater looking to take the tailgate to the next level.

It’s also perfect for that home-gate in your backyard for the football playoffs.

LED Lights up the Beer Pong

This beer pong table has lights!

It’s lit with LED lights to make it energy efficient. But yes, you’ll still need something to plug the Infinity Beer Pong table into. Good thing you’ve got your RV and your generator, right?

There is also a sensor that will pick up nearby music and will change colors and flash in tune with said music, making it a perfect addition to Awful Tailgate Karaoke night.

Each side of the table is controlled separately, so you can have different colors, patterns, or music sensors to fuel the game. Have you ever been in one of those exhibits that have infinity mirrors?

Atlanta had one at the High Museum of Art earlier this year. And it’s awesome. Here’s a picture courtesy of Matt Stigall that shows the cool effects of infinity mirrors in a room.

When you add infinity mirrors to a beer pong table, you get some similar cool effects.

You get the effect of millions of lights but in a small, compact table. At least, compact for all the lights you think you see. Now, the Infinity Beer Pong Table is not some flimsy table.

This thing is solid. Heavy.

In fact, you’ll need two strong people to move it around.

I got it loaded into the RV by myself, but let’s just say that I made some of the guys at the tailgate get it out and set it up. Because I was tired after struggling with getting it into the RV!

But that weight is a good thing, when it comes to hanging out at the tailgate. You aren’t worried about gusts of wind taking the table down, nor are you worried people falling on it.

Also, it’s important to note that the legs are not fold-out legs like many tailgate tables. Instead, these screw in and they might take some effort. They do store easily in the bottom of the table though, which makes it easy to store in the RV.

The technical stuff: It’s all a powder coated, non-rust steel frame which means you don’t need to worry about it rusting if you leave it in your RV basement for storage.

The Infinity Beer Pong surface is a scratch resistant plexiglass.

Which means you aren’t going to be worried about breaking some glass at the tailgate if someone does land on it.

I mean, I wouldn’t recommend going all Bills Mafia on it (if you don’t know what I’m talking about: here’s a YouTube video on Bills fans crashing tables from the tops of RVs).

But this table will withstand normal drunken shenanigans.

Beer Pong in a Parking Lot

The classic beer pong game has you putting the beer in the cups that you are throwing the ball into.

But since the ball is likely going to end up hitting the parking lot, rolling under tables, chairs, and even RVs and finding who knows what, I highly recommend that you don’t put the beer you are going to drink into the cups you are going to be throwing the ball into.

Because eeeewwww! I know, it’s girly, but I’d rather not get sick from drinking something random from the parking lot.

Instead, we play with a beer in hand (or next to the table). Instead of beer in the cups, we just poured some water in them. You’ll need something in the cups to keep them stable, but it doesn’t have to be beer. This also allows people, like say kids, that don’t drink beer to participate. Or if you want to drink a mixed drink.

And since the weather is cooling off here soon, you won’t have to be drinking from a cup someone else has. So hopefully, you’ll reduce the risk of catching a cold or other illness that could take you down from a tailgate.

For the record, those kids will probably beat you to a pulp in beer pong. Probably because they are sober and you are not! And they are ruthless. At least the kids at my RV tailgate!

PS Make sure that the drunk with the can of whipped cream doesn’t fill your beer pong cups with whipped cream. It just makes a mess. Ask me how I know…

You can’t play Beer Pong without the Ping Pong Balls!

Go with the classic all-white pongs or perhaps the multi-color pongs to go with your changing color Infinity Beer Pong Table!

You’ll also need some Solo Cups! We were playing with gold Solo Cups which pick up the colors from the table lights really well.

Another cool option would be some jet black plastic cups.

The Infinity Beer Pong Table Lights Up Your Tailgate Ready for your next long tailgate? Better keep everyone entertained and what better way than a few tailgate games of beer pong?

Don’t forget to use promo code “RVTL2019” to get 10% off your order of the Infinity Beer Pong Table!

You might also like:
Protect Your Tailgate TV with the MyTCase
The Best RV Tailgating Pop-up Tent
The Best Dash Cam for RVers