In other words, you might as well be on the surface of the sun.

With kickoff or first pitch at high noon, it’s going to be a doozy just for you to survive the next four hours cheering on your favorite team. All the NFL stadiums and just about all the college stadiums have adopted some form of the Clear Bag Policy.

In a nutshell, you can’t bring in large bags, purses, or backpacks. Everything you bring in is limited to a small clear plastic bag.

These Clear Bags are important in your Hot Game Survival Pack. In fact, they are the first item in the survival pack.

Because without the Clear Bag, you can’t bring in the other items for the Hot Game Survival Pack.

PS Many clear bags only have the shorter shoulder straps. The longer cross-body straps are great because the plastic will stick to your skin and feel gross. Also spring the extra dollar or two for one that zips close. This way you can throw in under your seat and not worry about things falling out. Or people spilling beverages into your bag.

Because who wants sticky Coke spilled onto their stuff? At least with the clear plastic bag, you can easily wash it off in the stadium bathroom.

In the NFL, you won’t be able to bring in any food or drink (limited exceptions for babies and medical necessity). But some colleges may allow you to bring in some sealed plastic bottles.

If the stadium allows it, then the second item in your Hot Game Survival Pack is frozen water bottles.

Yes, you need to freeze them before you go into the stadium. Because otherwise, they won’t stay cool into the second half. And very few stadiums have enough cold water on the really hot days.

Unfortunately, the stadiums that allow you to bring in even sealed water bottles are dwindling.

If you can’t bring them in with you, try drinking a cool one on the way to the stadium from your tailgate spot. Hydration is key during hot games!

Since you can’t always bring in water with you, the next best thing is to get water at the stadium. But who wants to buy stadium priced water?

The best idea though is a misting water bottle.

Mist helps to cool you down, the same way that your sweat helps cool you down. As water moves from liquid to gas, it takes energy (aka heat) to change forms. As the water evaporates, it absorbs the heat and cools the surrounding area. Thus, lowering the ambient temperature in the area and making you more comfortable!

The big professional systems that you might see at some ballparks and amusement parks can cool the air temperature by 30 degrees or so.

Now, the O2 Cool Mist Bottle won’t cool it down 30 degrees for you at the ballpark, but a few degrees is reasonable.

In addition to the misting, you can keep drinking the water. Because hydration is key to surviving hot ballgames. Water is good.

What’s better on a hot day than a cool breeze?

Unfortunately, stadiums are notorious for having so little airflow. But what if you bring in your own airflow?

The next item on the Hot Game Survival Pack is a handheld battery operated fan.

I have this OPOLAR handheld fan. I love it for a lot of reasons, including the long battery life (it survived the whole game on high). You charge this with a USB cord, so no batteries to keep track of.

The fan also folds so you can adjust it to aim right on you, no matter how the seats and cupholders are.

You can also disconnect the fan for a backup battery to charge your phone.

So friends might pick on you. But they sure will love you if you have one of these fans. And survival is better than suffering through the heat.

Trust me, go get a handheld battery operated fan.

Have you found the awesomeness that are cooling towels yet?

Seriously, these things are absolutely awesome.

When you are filling up the water bottle inside the stadium, take a quick stop in the bathroom to use the sink. Get this towel nice and wet, then wring out the excess moisture. The cooling towel then uses the same evaporation techniques that misting does to help keep you cool.

Most towels will provide relief for 1-4 hours. When they stop being cool, just re-wet (if it is the middle of the game, just use some of water from that water bottle). Instant cooling relief!

These are great to keep around your neck or even over your head.

Getting a little crispy because you didn’t bring enough sunscreen? I have also found that cooling towels are great for instant relief from sunburns when you are still at the stadium. Cover your arms or legs to stop further burning from the sun and provide that cooling relief.

Don’t worry that these will make you wet. They need to hold onto very little water to keep you cool. They are just this side of “dry touch.”

Speaking of sunburn, you really shouldn’t forget the sunscreen. While this isn’t necessary a way to stay cool at the ballgame, sunscreen is a necessary item in the Hot Game Survival Pack.

Because if it is hot, it’s probably because the sun is out.

I typically use two different sunscreens: one for my body and a higher SPF sunscreen specially made for faces (to help prevent breakouts and what not).

For the body sunscreen, the CoolDry Sunscreen creates a breathable barrier between the sun and your skin. To allow for… you guessed it, evaporation!

You’ll also want to take in a hat – a “floppy” hat a la fishermen are best since they are loose and also cover your neck and ears.

A ballcap will also do. Because shade brings down the temperature. And it protects sensitive skin.

Sunglasses are also quite helpful. So you can again see the game.

I love white linen shirts to stay cool – remember, white reflects the sun and darker colors absorb the sun. So stick with white shirts. Linen is nice because they should be slightly wrinkled – so no ironing required! Pack up your Hot Game Survival Pack in your stadium approved clear bag. And you’ll be the “coolest” fan in the stadium.

Like the Hot Game Survival Pack? Pin for later! 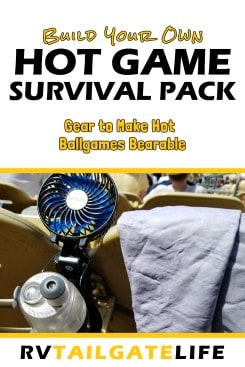