Last night, the RVTailgateLife.com crew took our own advice to surviving the last 30 days until football season. We all went to Guns N Roses at the Georgia Dome. Due to the mid-week timing, we weren’t able to do a big time tailgate. Everyone is saving vacation days for football season! But we did have a lot of fun and we are one day closer to football season!

Axl Rose, Slash, and the other members of the band put on a high-powered rock show for almost three hours. They hit all the big songs they are known for, including Welcome to the Jungle, Paradise City, and Sweet Child o Mine. They included a few covers and guitar solos to highlight Slash and Richard Fortus. The solos also gave Axl a chance to rest his voice.

Early reviews of the concert tour, “Not in this Lifetime” left many questioning whether Axl could survive an entire show. The band did well to arrange the show to give Axl breaks to rest his voice and come back strong. They kept the show moving, making it hard to skip out for beer or bathroom breaks. You wanted to be in your seats the whole time! And even though the band is notorious for starting late, you better be prepared for them to start on-time or even early. We’ve been told that GNR went onstage 15 minutes earlier than planned.

With the recent news release that the tour is scheduled into 2017 and no official end date in sight, you should have plenty of opportunities to see Guns N Roses in concert. Despite their aging years, it was still a great show and worthy of the ticket prices.

For many, they checked off a bucket list item last night. Or as one friend said, “I’ve waited 25 years for this.”

Dome Security Cracks Down on Purses

Ticketmaster and pre-concert media were clear to point out the Georgia Dome’s bag policy – clear bags only unless they were 4.5 x 6.5 inches or smaller (think really small wallet). Several people complained about how strict security was about the bags. Security scrutinized many bags and rejected many small clutches that ladies have taken into NFL events in various different stadiums. Fortunately, security lined the walkways into the stadium and the gate entrances. Security did not wait until people were at the gates to turn them away for violating the bag policy. People were able to return to their cars or check their bags for pickup after the concert. If this is a preview of NFL game security, fair warning that they are being tougher this year.

Based on the smells in the Dome during the concert, security wasn’t so good about finding illegal drugs.

Verizon Club had Football On 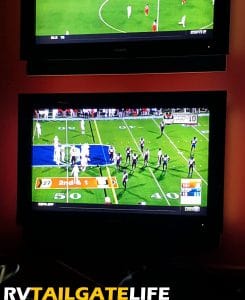 The Verizon Club had several different sports events on including baseball and most importantly football. Sure, it was a replay of the Miami-Duke game, but hey, it was football! You know you are hurting for some football when even a replay of a game without our favorite team is interesting.

The Verizon Club area also had all the normal club section food options and shorter lines for t-shirts, beer and restrooms. Last night, it was a welcome gift after fighting through the lower level concourses blocked as people waited to buy beer and concert t-shirts.

Less than a month until football returns. We can survive! We have to!