Bobby Dodd Stadium is home to the Georgia Tech Yellow Jackets football team. It is the winningest college football stadium in Division I football. It has been the home of great football coaches like William Alexander, John Heisman, and its namesake, Bobby Dodd. 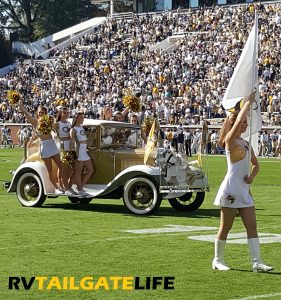 The Georgia Tech Marching Band performs a pre-game show on the field. The pre-game show includes the playing of the National Anthem, followed by the team coming out behind the Ramblin Wreck, a 1930 Ford Model A Sport Coupe. The marching band will return for a halftime show. If the visiting team brought its band, they are usually invited to play at halftime as well.

Hopefully, you’ll be able to see a pre-game flyover. The flyover in 2009 against Wake Forest was awesome but not really that safe – the planes came in too low. It was cool to watch from inside the stadium. Here’s a view from the Upper East Stands:

With the city location, there’s something special about a night game at Georgia Tech. Or maybe it is the vast amounts of whiskey that the fans will drink prior to the game. Both whiskey and rum are in the fight song and Georgia Tech fans like their alcohol. For the most part, though, Georgia Tech fans aren’t going to be getting into too many fights with you (students excepted, because students).

Speaking of alcohol, if you’ve never seen it before, stick around between the third and fourth quarters. The marching band will play Budweiser and the fans all bob up and down. It is also the loudest cheer of probably the whole night unless it’s just a really intense game.

Parking and Tailgating Before Games

Every game day needs a tailgate. This can be difficult at Georgia Tech, since the campus has space restrictions due to the city location. Unlike some of the other schools around the southeast, there are no large fields for parking and tailgating. Most parking is limited to season ticket holders with few opportunities to buy single game parking passes. For those few areas that do have single game tickets, be prepared to walk (even season ticket holders will mostly be walking). And the campus is hilly.

If it is a Thursday night game, oh boy, are you in for it. Tailgating lots are student and faculty parking the rest of the time. And since this is a research institution that takes the school part seriously, it is always a battle to get access to the tailgating spots early. Don’t plan on being able to get into a tailgating parking lot until 5 or 5:30 PM for a Thursday night game.

For non-season ticket holders, including visiting fans, your best bet for tailgating and parking is going to be across the interstate, in parking lots along Spring Street, near the Varsity. This is where all the Atlanta United supporters groups setup for their tailgates when the team was playing at Tech before their new stadium was completed.

If you aren’t tailgating, your best bet will be to take Marta to the game. Marta is Atlanta’s version of a subway. It doesn’t go a lot of places but it does get you close to Bobby Dodd Stadium. You’ll want to get off at the North Avenue Station and walk towards the west and across the interstate. You won’t be able to miss the stadium from there.

You won’t be able to park with the Georgia Tech RVers, unless you know someone who already parks there and can find you a pass from someone that won’t be attending. There are limited RV spots available on Tech Parkway for purchase. If you are planning on attending a game at Tech and you will be taking your RV, make sure to get one of these passes ASAP since space is limited. It’s also first-come, first-serve as to parking locations once you get there. No reserving your spots, even with the pass. Tip: Get there early to find the best flat spots to setup.

Unfortunately, you will be on the side of a road that has heavy game day traffic. It is bumper to bumper for a good hour after the game. If you aren’t planning on staying overnight, don’t expect to leave quickly after the game. You probably don’t want to be driving your RV in game day traffic anyways, no matter which school you are at. Another drawback to Tech Parkway is that you won’t be able to setup in a group. Instead, you’ll be lined up, head to tail. Some of the curbside area is grassy or shady with a few feet to setup an actual tailgate.

Georgia Tech follows the NFL Clear Bag Policy. That means you will be limited to really small purses and bags unless you have a clear bag to put it all in. The good news is that you can take in sealed plastic bottles (of the non-alcoholic variety) and food/snacks. Your bags are subject to search. Beginning in 2017, Georgia Tech has also started wanding fans entering Bobby Dodd Stadium. You have to take everything out of your pockets before going in.

It’s best to enter the gate printed on your ticket. Bobby Dodd Stadium is old and has been added onto sometimes haphazardly. This means many of the concourses are small or narrow, leading to congestion. By entering in the assigned gate, you’ll have the shortest and least congested route to your seat. If you enter in another gate, your progress may be halted by a giant gap or nearly impossible to pass areas unless you know all the secret routes. Just enter through the proper gate for everyone’s sake.

Best View of the Game

If you are into the x’s and o’s of the game, then the best seats in the house are going to be in the lower rows of the Upper North deck. You’ll be able to watch Coach Paul Johnson’s (don’t call it the) Triple Option Offense plays in great detail.

Best View of the Skyline

Bobby Dodd Stadium is smack dab in the middle of Atlanta. In few other stadiums do you get to see skyscrapers while you cheer on your team. For the best views of the Atlanta skyline, check out the Upper West or Upper North sections. You can see downtown and midtown Atlanta. Even the East side has cool views, particularly of the Coca Cola building. But for cool Instagram worthy pictures, find a seat in the Upper West or Upper North.

The view from the GT President’s Box, at the top of the Lower West Stands, during the 2017 Spring Scrimmage: 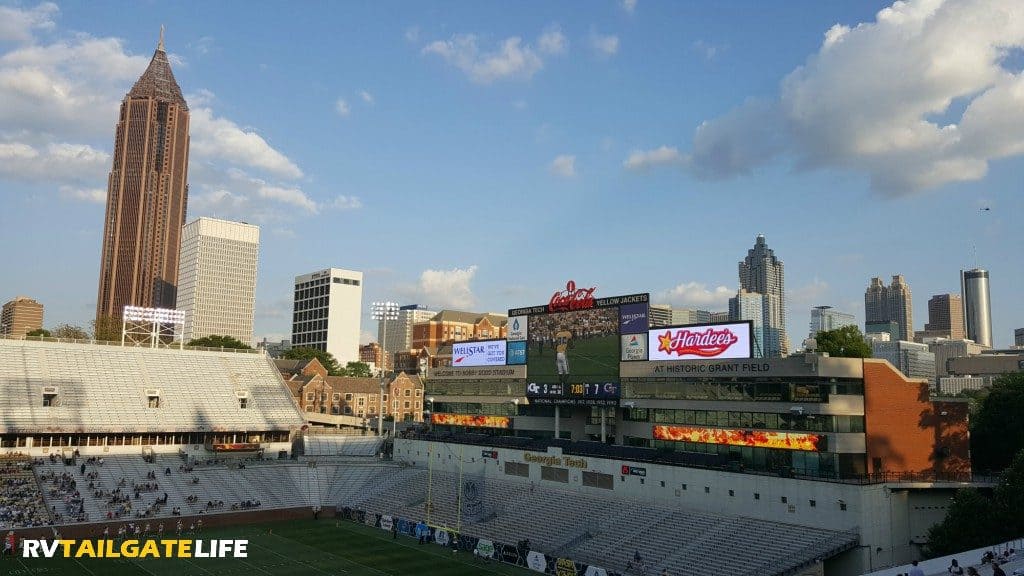 See that section of gold seats in the middle of the East Stands, behind the visiting team? That’s the Club Section. There’s three sections here of gold chairs – unlike the bleachers of the rest of the stadium. This section has its own air conditioned/heated concession area with TVs, which means when the weather is bad, many fans will find their way down there to watch the game on TV. This area also serves beer (you can’t buy the beer; you have to use the drink tickets that are part of the season ticket package). Fortunately, GT changed the policy in recent years to allow the fans to take the beers into the seats so people aren’t staying out of their seats to drink their beer. Since the Club Section was added only a few years ago, everything in the Club Lounge is all shiny and new. Including the restrooms.

The View from the Club Section: 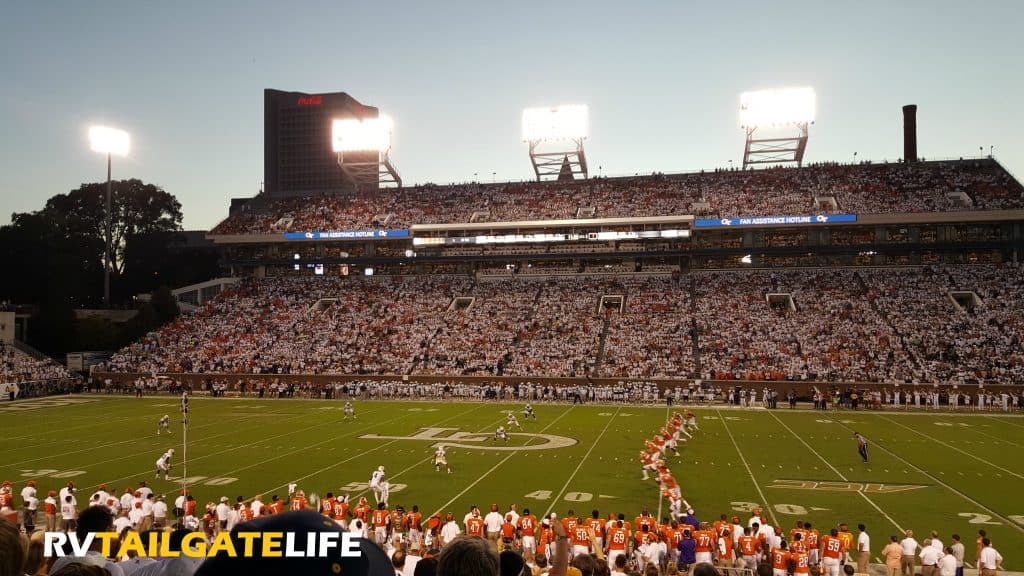 It’s not all great in the Club Section though. All of the East Stands at Bobby Dodd Stadium are in the sun until about 6:00 or 7:00 PM (later for the Upper East). This means that you will feel like you are melting in the early season games when kickoff is at noon or 3:30. If you are sitting in the East Stands, make sure to bring a hat and sunscreen. And dress appropriately for those early games. And drink lots of water.

If you aren’t getting your tickets through your school ticket office, you will probably want to get close to the south-east corner of the stadium. That’s where visiting schools typically put their bands, players’ family, and top donors. If you are visiting with a team that typically travels well or is in close proximity to Atlanta, you’ll probably find other visiting fans up in the Upper North. If you like to be around your own fans, these areas are your best bets.

However, be careful buying tickets in the South End Zone, next to the visiting fan section. These are Georgia Tech student tickets. Like at most schools, visiting fans will want to stay out of student sections. Plus, you have to show a valid, current student ID for these sections. Last thing you want is to be excluded from the section and not be able to watch the game. There’s another section of GT student tickets in the lower North End Zone, where the GT band sets up as well as a student spirit organization called The Swarm. Again, you’d be wise to avoid the lower north end zone. 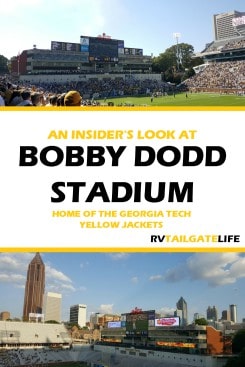 Unfortunately (for me as a Tech fan), there are way too many visitors from such schools as Clemson, Georgia, and Miami. Although it is really fun when we beat all of you! When we do, you’ll probably find me on the field with all my friends celebrating. It’s not really permitted (not like at Clemson home games) but they will have to stop us first.

I won’t give you a rating on Bobby Dodd Stadium since I’m so biased. I do hope that you’ll join us for a game though. If you do, hit me up on Twitter so I can invite you over to the RV tailgate lot!