Welcome to Atlanta, where we sell out the stadium for an MLS expansion team. 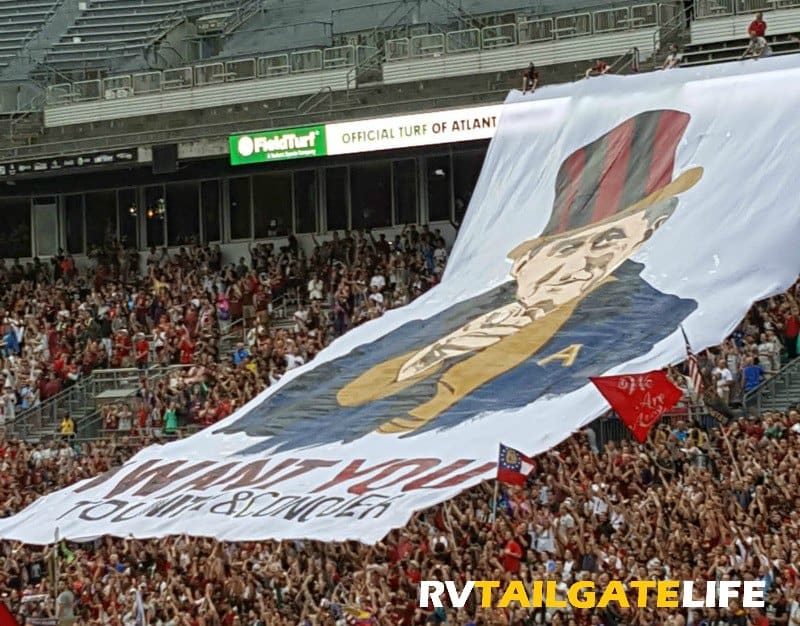 The July 4, 2017, game against San Jose Earthquakes was the eighth-straight sold out game for Atlanta United.

The announced attendance was over 44,000, on a very hot and very humid Fourth of July. The Atlanta area was under thunderstorm warnings at least until 5:30 for a 7:00 start time. I was pleasantly surprised by the attendance given the weather craziness. Of course, this team has played and its fans have watched a lot of matches in the rain this year. Regular fans just shrugged and said that it was good luck for the team.

As a Georgia Tech fan, I love that the games have been at Tech’s Bobby Dodd Stadium. As a Tech fan though, I hate the red and black colors. So I’ll just stick with black when going to games. 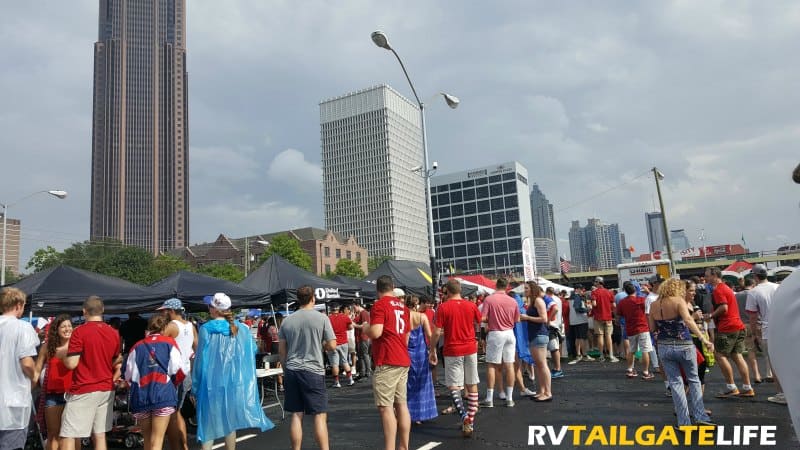 Atlanta United has a pretty good tailgating scene but without the RVs. I can definitely see the appeal of showing up for the Supporters Tailgate and having the food cooked up for you. And no clean-up. For $30, you can join the Faction for all-you-can-eat food and drink. Not a bad deal considering we usually spend way more than that per tailgate during football season! 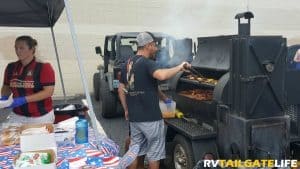 The Supporters Tailgate is just north of the Varsity. It is an easy walk from the North Avenue Marta Station, which really you should take advantage of. (Marta being the Atlanta public train/subway system) Parking is pretty limited around Tech and post-game traffic is ugh! Since you aren’t taking the RV, use Marta – it’s Smarta!

Don’t Miss The March to the Stadium 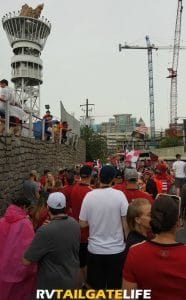 From the Supporters Tailgate, the crowd will march to the stadium from the tailgate about 75 minutes before the game. They go through a tunnel that goes below the 75/85 interstate. The march is a pretty cool show of support by fans before the game. They have drums and chant leaders to get everyone “marching” to the same beat and chant. It’ll get you ready for the crowd inside.

Speaking of going inside, Georgia Tech follows much of the same rules as the NFL and other colleges on the Clear Bag Policy. We saw lots of people with Falcons, Tech, and United clear bags so it doesn’t matter where the clear bags come from (you don’t have to buy an official clear bag). For the United game, unlike the football games at Bobby Dodd Stadium, security was wanding every person that came in. Be prepared for it to take a little longer than normal to get through the gates. If you leave the tailgate with the Supporters March, you should have plenty of time to get in the gates and to your seats. Even enough time to stop for beer.

I don’t recommend that you take this route back to Marta/tailgate after the game or any other time. The tunnel is kind of creepy when you aren’t with a large crowd. Trust the Georgia Tech girl here. Just avoid it all other times. After the game, go straight to North Avenue and walk across the bridge to get back to Marta. They had great crowd and traffic control to handle all the people leaving. Props to Atlanta, Marta, and Georgia Tech PDs (and any other agencies) that help with that. Awesome job by all!

Video is the second goal for Atlanta United when Josef Martinez scored off a header in the 65th minute right in front of the Supporters Section.

As you would expect for soccer games, the Atlanta United crowd is loud and boisterous. If you are near the North End Zone, be prepared! That’s the Supporters Section, a general admission free-for-all. They get there as soon as the gates open and are among the craziest fans in the stadium. Most of the chants will start in the North End Zone. This is also where they hammer the Golden Spike before the game and the MVP of the game receives their own spike post-game.

Oh, and yes, they serve beer throughout the stadium during soccer matches.

This Team is Fun to Watch 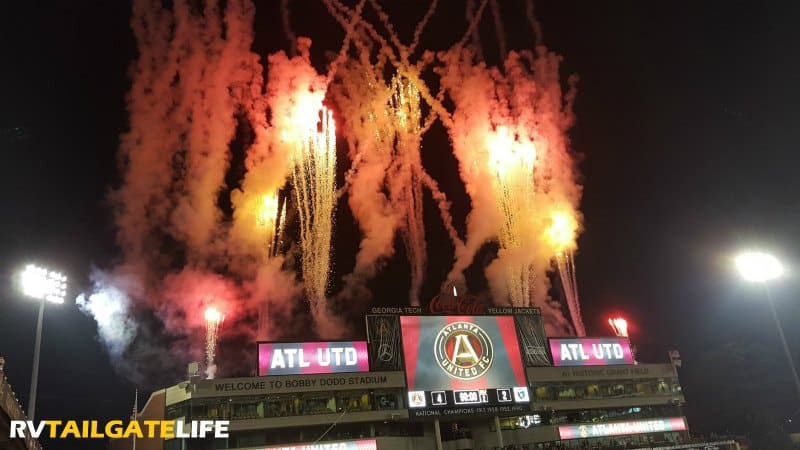 Atlanta United will be at Georgia Tech’s Bobby Dodd Stadium through the end of August. The team will move to the new Mercedes Benz Stadium (the new home of the Atlanta Falcons) for their first MBS game on September 10, 2017.

But here’s a hint – go as soon as you can. This team is fun to watch. And they are currently in fourth place, good enough for postseason play in their inaugural season. And who doesn’t love to watch a winning team?

Now, if only we can get the RV tailgate scene going before the matches…