There’s nothing quite like a championship, other than the Championship Parade. It’s Been Awhile Since Atlanta was a Champion

So the last Atlanta championship was in 1995 when the Atlanta Braves won the World Series.

It’s been 23 years since we last had a championship parade in Atlanta.

Think about what’s happened in that time…

Some say that Atlanta sold its soul for the 1996 Olympics, seeing as we hadn’t brought home a Championship since then. But maybe we only leased it to the Devil for a few years.

Thanks Atlanta United for bringing home a championship!

Don’t Let the Media Fool You

Atlanta gets a bad rap some times about not supporting its teams. But you can’t say that Atlanta hasn’t supported the Atlanta United.

From the beginning, even when Atlanta United was playing in Georgia Tech’s Bobby Dodd Stadium, the Atlanta fans came out to support this team. Now that they are playing at Mercedes Benz Stadium, also home of the Atlanta Falcons, the fans are setting MLS attendance records.

And for the record… Atlanta has the 9 most attended MLS stand-alone matches. (At last check, Wikipedia hadn’t updated the attendance records from the 2018 MLS Playoffs)

Just in case you were wondering…. Soccer can make it in Atlanta.

Here are some scenes from the 2018 Atlanta United Championship Parade, on a rainy Monday morning in Atlanta. 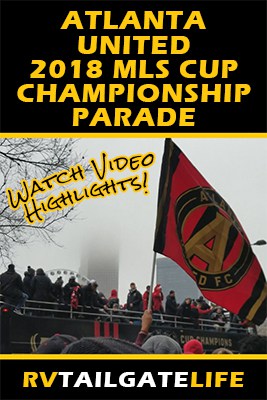 Now if only Uncle Arthur would decide he wanted a hockey team (probably the only way that Atlanta will ever get another NHL team here).