Ever wanted to take a closer look at one of those uber-fan RV tailgates?

It’s so awesome, you may want to just stay and tailgate instead of going to the game. (That’s what I did!) It’s going to be hard to beat these Falcons fans when it comes to NFL fandom and RV tailgating. Because if there is a spot for an Atlanta Falcons logo, they’ve put the logo there!

After tailgating with the Dirty Birds Nest, you will have absolutely no doubt which NFL team is their favorite.

Seriously, if you drive up and don’t know, I’m just going to assume you are playing stupid.

The center of the Dirty Birds Nest Tailgate is a 1995 Winnebago Vectra 34RA.

The standard paint job on a Vectra is much of what you would expect from mid-1990s RVs. Mostly beige with purple, blue, and teal accents. Not the swirls of today’s RVs. But pretty generic. And plain. And ugly.

So Matt and his friends decided that they needed to do something Falcons.

A buddy of theirs has a vinyl shop, so they went to town. Falcons town. The main horizontal stripe around the middle of the RV is now Falcons red with black borders.

The hood on the front of the RV even has Falcons handles and a bottle opener, in case you forgot yours! The side of the RV has a large Falcons logo facing the passenger side and tailgate space.

The awning has been replaced with a special Falcons logo awning.

The tires even have Falcons stem caps.

The Inside of the Falcons RV

Now, Matt and his buddies didn’t stop with just making the outside a Falcons showcase. No, they went all out on the inside too.

I think they just went and bought everything possible from the Fanatics and Amazon stores. Every cabinet door knob has a Falcons logo. And every door has a pennant on it.

They even went so far as to add red rope lighting around mirrors and cabinets. Because you know, there just weren’t enough Falcons gear inside already.

Did I mention that they also have a TV in the bathroom? Because you don’t want to miss any of the game!

Now that’s an impressive RV, definitely leaving you no doubt that these guys are Atlanta Falcons fans through and through.

But we aren’t done with the Falcons gear! We’ve got a tailgate to run!

And what better way to run it than with a Falcons tailgate trailer! If they painted their RV in Falcons colors, you’d expect the same for their trailer, right? But of course!

It’s red with giant Falcons logos on it as well. 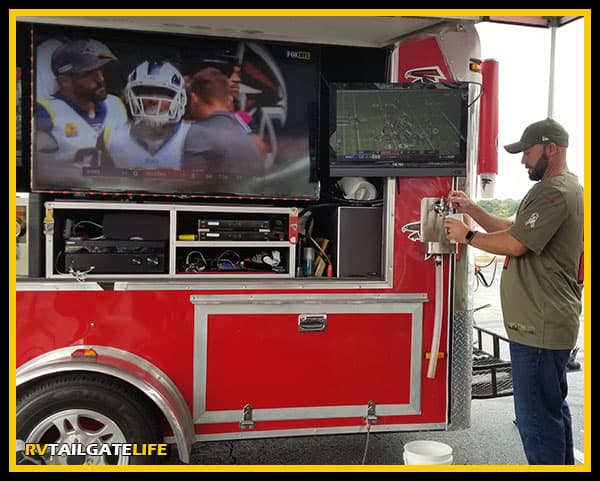 On the tailgate side, it opens up with a big screen TV and two smaller TVs, perfect for watching the Falcons and also keeping up with all the other action going on in the NFL.

Oh yeah, and the two TVs on the side of the RV.

That’s five TVs all within your tailgate to not miss the game.

They also have two liquor dispensers with bottles of Jack Daniels and Fireball whiskey. And at the other end, they have the kegerator with cold beer on tap.

Now, the trailer isn’t just for the TVs and kegerator. It’s also useful to transport all the tailgate stuff. The trailer carries two pop-up tents, both of which have been, of course, customized for their Dirty Birds Nest tailgate. It also carries several high top tables and bar stools – with Falcons logos, of course.

About the only thing they don’t have is Infinity Beer Pong, customized for the Dirty Birds Nest tailgate.

As one would imagine, all of this takes a lot of power. The Dirty Birds Nest is run by two external generators.

They have a Champion 2800 Watts Inverter generator that runs the RV.

And a Honda EU3000i portable generator that runs the trailer and everything on it.

Now, it’s not often that you find people that have used both the Champion and the Honda generators for extended periods of time. But Matt and his crew have.

Matt says that without a doubt, the Honda generator is the better and quieter generator.

I ran some tests during the tailgate. They had very similar dB readings but the Honda was slightly quieter. But the Honda was running a lot more tailgating stuff than the Champion was at the time.

See, it was a pretty cool day so no air conditioner or heater was needed for the RV. It was just running some TVs, lights, and the occasional water pump for toilet use.

Unlike the trailer which had TVs, stereo and surround sound, lights, kegerator, freezer, and a lot more.

Matt was quite strong in his opinion that the Honda was the superior generator. With two generators running, you are also going to go through some gas. The Dirty Birds Nest Tailgate has a DuraMax Flo n’ Go Gas Can.

It’s like a small gas pump on the go. And so much easier than dealing with traditional gas cans for refilling the generators on the fly.

Much smaller chance that you are going to spill gasoline all over the parking lot since you just use a small pump handle and don’t have to pick up the large gas can.

Tailgates are subject to all sorts of weather conditions. This happened to be a nice fall day, but early on, it was quite windy.

Pop-up tents should always have weights on them to keep the tents from flying away in the wind.

Now, you can go with the traditional sand or water weights or you can make your own! This is easy enough with two gallon sized paint buckets, some long machine screws, and some wing nuts.

The screws and wing-nuts are great to help secure the bottom of the pop-up tents. With the three inch (or more) height, the tents aren’t likely to fly off. The wing-nut makes it even less likely.

The buckets also give the tents a little bit of extra height so people are less likely to bump their heads.

If you are going to be RV tailgating at Mercedes Benz Stadium, for any event – NFL Football, college football, high school football, concerts, or truly any event, then you’ll be at the Marshalling Yard off Ivan Allen Boulevard.

The Marshalling Yard is a pretty large lot. And because it is open all the time and not run by the NFL, it doesn’t have the same 2 hour tailgating rule that many RV lots have around the NFL. That means you can stay for more than 2 hours after the game.

Including say, overnight, which could come in real handy for any of the night games.

The Marshalling Yard is about a 10-15 minute walk on game days to your gate. With all the TVs, endless supply of beer, and no bathroom lines, why would you even want to leave the tailgate to go to the game?

Like this Atlanta Falcons RV Tailgate? Pin for later!

You might also like:
Inside the College Football Hall of Fame in Atlanta, GA
Tips for Renting an RV for Tailgating
5 Tips for an Epic RV Tailgate Road Trip