Are you ready for some deep discounts on all your favorite RV and tailgating products?

Then get ready for Amazon Prime Day 2020! It’s like Black Friday in August or maybe even September (more on that in a minute)!

Skip Directly to the Deals! and the Non-Amazon Deals Disclosure: This page contains affiliate links for various products below. You get the same low prices and as an Amazon Associate I earn from qualifying purchases.

What is Amazon Prime Day?

Prime Day is a one (plus) day shopping event by everyone’s online favorite retailer – Amazon.

A lot of people will put off summer shopping until Prime Day, just to catch all the bargains.

The cool thing is that other large retailers also try to get in on the craze by offering their own competing sales and deals. So it’s a big win-win for shoppers like you and me.

During that period, a lot of products (although not all) will be discounted, some with deep discounts. However, not all the products are discounted for the entirety of Prime Day. Some are limited deals, available only certain hours.

And many of the deals are limited on the number of items that they will sell. They may only offer 1,000 or 10,000 or some other limited quantity at the discounted price. So if you see a deal you like, you better jump on quick! There’s no waiting once you find a good deal.

Amazon has not announced when Amazon Prime Day 2020 will be.

Amazon is likely to announce the exact dates in May or so.

Normally we would expect Amazon Prime Day to be around July 13-14. But with all the craziness that 2020 has been, it appears that Prime Day is going to be postponed to sometime in at least August. Maybe even later into September.

Are You Ready for Amazon Prime Day?

To get ready for Prime Day, you’ll need to be a member of Amazon Prime.

The biggest benefit of Amazon Prime is definitely the two day free shipping on over 100 million items. In many cities, you can get free same day or next day shipping on many items (not everything but whatever they stock in their local warehouses are going to be eligible).

The good news is that you get a 30 day free trial using this link.

Amazon Prime is more than just the free shipping though.

Prime has a lot of extra benefits that RVers love:

The Amazon App Has Special Deals

Want to know a (not so) secret?

And on Prime Day, you’ll have special early access to certain deals through the app.

But wait until you sign up for Prime to download the app! Amazon will often send you an email with a discount code to save you an extra $5-20 to download, install, and order from the app! Who can say no to free money, right?

Another ongoing benefit of the Amazon app – the app will notify you when packages are delivered. Often even sending you photos of where they left the box. That’s kind of cool, so you know when your Wheel Witness Dash Cam arrives!

Save with an Amazon Store Card

If you are an avid Amazon shopper like me, then you might benefit from the Amazon Store Card.

The Amazon Store Card has no annual fee and 5% cash back on your Amazon purchases if you are a member of Amazon Prime.

The Amazon Store Card also has quite a few special sign on bonuses throughout the year. In March 2019, they are offering $40 in Amazon gift card credit after approval of your application.

And on Prime Day, you can get even more back! They’ll up the cash back reward, to say 20%, on Prime Day. That’s an extra savings!

Don’t Miss Deals from Other Stores!

As Amazon Prime Day approaches, you’ll start seeing some of the deals be announced. I’ll include the top ones here.

In addition to what I’ll call the top deals, a lot of other products will be on sale. RV necessities, like sewer hoses, gloves, LED bulbs, wash and wax gear and more, will be available at deep discounts.

It’s a great time to stock up on these items or replace worn items.

And while these things are great, they don’t attract quite the same attraction as the top deals.

In 2019, you could get $40 in Amazon credit before Prime Day even happened. As we get closer, I’m sure Amazon will once again be having similar promotions.

So check back as the weather gets warmer for ways to super size your Prime Day benefits.

Other Deals This Week

You know, it’s not just Amazon. Other stores are having cool sales at the same time too!

Walmart had some solid deals during the 2019 Amazon Prime Day event. Look for similar deals as we approach.

Camping World also had some good deals for RVers during Prime Day in 2019. 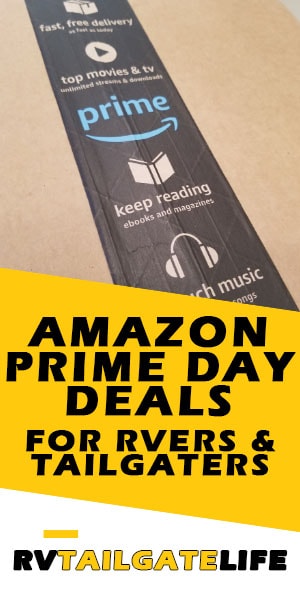